Joni said:
And we'll see how fast they start scratching stuff if it doesn't work out or before we end up with bad looking high budget stuff like Another Life.
Click to expand...
Click to shrink...

I mean, Netflix right now is the king of sort of low-high budget (if that makes sense). The money Disney, Apple, Amazon, and AT&T) are throwing around will make even their highest budgeted stuff look much lower. Netflix probably WILL have a tough time keeping up (which is going to be another problem for them in the near future), but they're still dabbling in this stuff be it stuff already released like Altered Carbon and Lost in Space, or upcoming like The Witcher and Cowboy Bebop.

Not every show is going to have a mega-budget. They don't all need it. But these big genre shows absolutely will. If some of them don't work out and get cancelled, they're not just going to all of a sudden stop making others. The bar has been set at a certain level, and it's going to continually be raised. Which drags up even the lowest budgeted shows out there. The industry isn't going to backslide on this. Just look even 10 years ago, before any of the streamers existed, and compare what shows looked like then compared to the 90s. Television is rapidly evolving.

The numbers are for the past year. Would be interesting to see where something like Russian Doll or GLOW Season 3 come in.

TDLink said:
Not sure what this means. Last three seasons of what? The Arrowverse shows are all made in a distinctly different way from how Lois & Clark was made in the 90s. They're even made in a pretty different way from Smallville only last decade, although that one is arguably the precursor of the current formula in quite a few ways.

How exactly are they going to stop? They've each outlined/greenlit at least 3 years of tons of high budget content.

None of the services need to release a super big thing every month, that is what the deluge of lower budget stuff is for. Filling those gaps between the super big shows, of which each service will have 4-5 (at least) a year. Also, consider that Disney+ is going with the weekly release model, not the binge model -- which will help some things. We don't know if HBO Max is doing the same yet.
Click to expand...
Click to shrink...

Sorry, I meant smallville being the series that the last three seasons that felt like a proper Lois and Clark reimagining.

TheNatureBoy said:
The numbers are for the past year. Would be interesting to see where something like Russian Doll or GLOW Season 3 come in.

Surprised and happy at Unbelievable's numbers. It's a great mini-series that doesn't get talked a lot and since it's such a difficult subject, I never expected it to get big numbers.

LFMartins86 said:
Surprised and happy at Unbelievable's numbers. It's a great mini-series
Click to expand...
Click to shrink...

Norwegian Rudo said:
About that...

Anthology's are a tricky thing, first season worked because the story was interesting and the 3 leads gave wonderful performances. Let's see what they do for a possible second season. 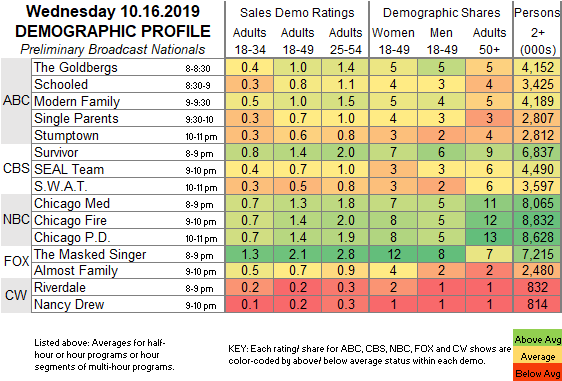 While this is clearly a PR type of show, I am actually pretty interested in this, assuming they actually show/detail things that aren't already publicly well known.

Really getting concerned about S.W.A.T.

Wow on those Chicago numbers. Was last night the big crossover?

TDLink said:
While this is clearly a PR type of show, I am actually pretty interested in this, assuming they actually show/detail things that aren't already publicly well known.
Click to expand...
Click to shrink...

I'm also pretty interested in this show but I do enjoy watching Youtube videos about the history of theme park rides so this really just seems like an official version of something I already enjoy.

Thanks for making a new thread