First off salute to all RetroERA. 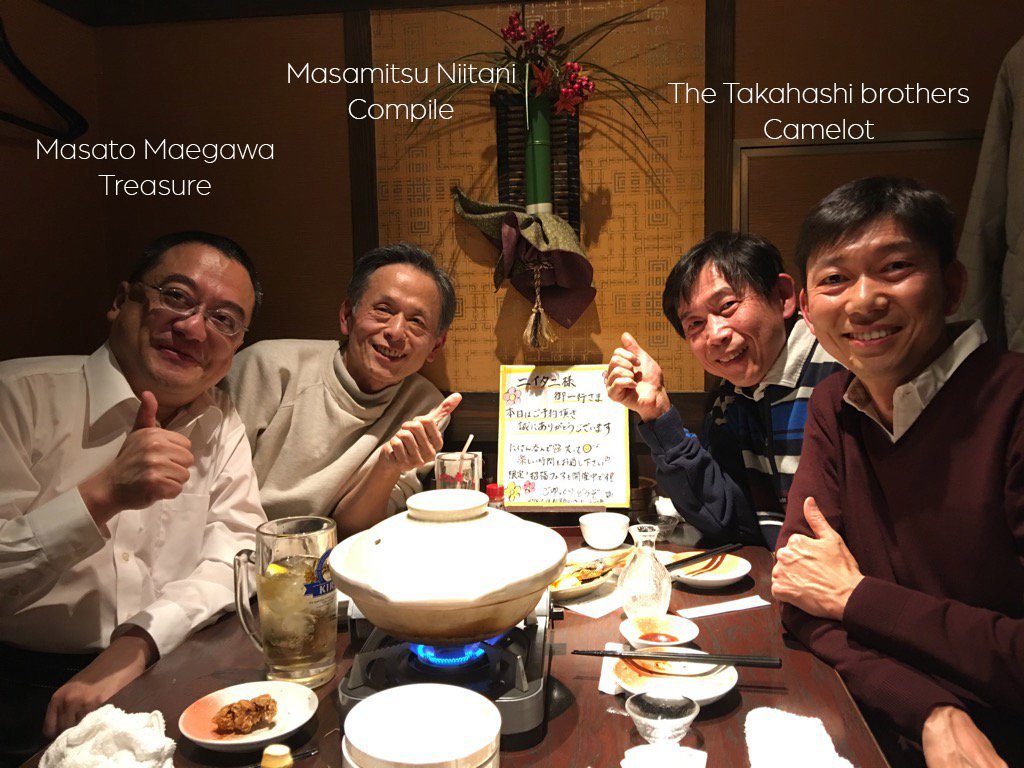 Yesterday it was held the "3rd Game Business Archive" in Japan featuring Masato Maegawa (Treasure), Masamitsu Niitani (Compile) and Hiroyuki Takahashi (Camelot).
There Hiroyuki Takahashi expressed his desire to develop Shining Force 4.
Of course it's always a matter if the original Publisher wants to fund a sequel on one of its IPs and I think the chance for Sega to want to fund a new Shining Force are quite low.
There were other interesting tidbits from this conference related mostly to Mega Drive.

- Shining in the Darkness shipped 300K in Japan, he noted that at the time it was about half the MD install base in Japan (Note from me: actually , as March 1991, MD had shipped 1.90 million units in Japan).

- Shining Force CD was kind of a practice exercise for Mega CD, so they decided to add bonuses.

- Gunstar Heroes shipped about 70K in Japan and 200K abroad. The first production run in Japan was 10K and sold out instantly.
Unfortunately it was slow to ramp up production.

- Masato Maegawa complains about the lack of communication with Sega.
Treasure didn't get any support from them during the development of Yu Yu Hakusho (MD).
Treasure was developing mainly for the oversea markets.

- Masato Maegawa is asking for a Mega Drive Mini.

If its even close to SF I and II (haven't played III) I would buy it in a heartbeat.

I'd love for Camelot to finish Golden Sun. Leaving their last game on a cliffhanger is worse than when the series was first dormant.

Would love a new Shining Force,oh and I'll take a megadrive mini

I'd rather a Shining The Holy Ark sequel/spiritual successor, but I certainly wouldn't be upset at the prospect of another Force.

Think I read that they wanted to do a Breath of Fire game as well but Capcom probably destroyed/killed the series after killing off their BoF6 -__- mobile game.

I would be so hyped for this...

i would cry. but it will never happen :(

what did compile say?

Much rather Golden Sun since it is nowhere near finished.
OP
OP

Samurai_Heart said:
Think I read that they wanted to do a Breath of Fire game as well but Capcom probably destroyed/killed the series after killing off their BoF6 -__- mobile game.
Click to expand...
Click to shrink...

Nope, it's just that many years ago Capcom was publishing one of their golf game so fans speculated that maybe Camelot could be doing a new Breath of Fire too.

Cubed³'s Adam Riley: Considering your current deal with Capcom, and the fact that the company has left its Breath of Fire series untouched for far too long, would you ever give consideration to tackling the resurrection of that RPG franchise?

The Takahashi Brothers: We get asked this a lot recently. The development team is extremely important in making an RPG and when some of the team left after Mario Tennis GBA we had to say it wasn't possible. Lately, however, the gap is being filled and I'm quite confident to take on pretty much anything. It is possible to start planning for titles such as the Breath of Fire series. As I mentioned earlier, the number of games we can develop at a time is quite limited so we would like to consider what people want the most in order to determine the next title for development.
Click to expand...
Click to shrink...

What's interesting about the interview above is that Takahashi bros. confirmed how part of Camelot's RPG team defected around 2005.

I would take a Shining Force 3 remaster as well...with all three scenarios on one disk/cartridge...

They haven't been developing anything worthwhile since 2009 (Sin and Punishment 2). They are a tiny team, after all. I think they are done in making original games.

Symbios63 said:
I would take a Shining Force 3 remaster as well...with all three scenarios on one disk/cartridge...
Click to expand...
Click to shrink...

Wouldn't that be the day.

It's just not happening, though, since SEGA's not gonna license to Camelot on account of their mutual dislike. Shinning Force III Scenario 3's development turned rough largely because SEGA abandoned Saturn developers like Camelot to focus on the Dreamcast. Camelot got so mad about this that they hid developer rants inside the Premium Disc! So they went to Nintendo for an easier gig, and I don't blame them. But I'd love to see a new wargame from Camelot which resembles Shining Force in style and play, hopefully without a repeat of Tear Ring Saga.

Niitani sure doesn't look too good. I hope his puzzle game's doing well enough to drag him out of poverty. And where has Treasure been?

Symbios63 said:
I would take a Shining Force 3 remaster as well...with all three scenarios on one disk/cartridge...
Click to expand...
Click to shrink...

Man that would be rad as heck. Never thought I'd hear anything about Shining again. Also I have to admit, I didn't know that dev team was the dev that made the Shining series, I just knew them from their Nintendo titles, pretty cool to learn the history!

I would love a new proper Shining Force so much. Too bad Sega doesn't care at all.

Logistically, that could be very difficult. Doesn't seem like they had a great working relationship with Sega and they've long since partnered with Nintendo. Not sure how binding that partnership is, but they've developed exclusively for Nintendo platforms for nearly 20 years now.

They could do a spiritual successor though.

I'd buy 5 copies. Also re-release SF3 trilogy while you're at it!

I wouldn't say no.

Just remake Shining Force 3, combine all 3 parts into one definitive package with HD visual and modern console/PC port and bam. I've never played this series before outside of the two ARPG SF games on PS2 but the gameplay looks to be up my alley.

We need a Treasure comeback.

I would really love to see this happen.
But you know what would be even better ? Golden Sun (new one, remake or even a remaster at this point)...

Shining Force 4!!! As much as I'd love to see it happen I won't even begin to get my hopes up.


Dark_Castle said:
Just remake Shining Force 3, combine all 3 parts into one definitive package with HD visual and modern console/PC port and bam. I've never played this series before outside of the two ARPG SF games on PS2 but the gameplay looks to be up my alley.
Click to expand...
Click to shrink...

This would be amazing as well but I fear it is just as much of a pipe dream.

I'd be there on day one. Last sf I played was 3, and I'd love to play another compelling tactics rpg. Games such as Crash or Ratchet being launched at cheaper prices have done extremely well, so maybe there's a chance, Sega!

Well, I don't believe we'll ever see it happen, but I'd buy day one probably. Even if my gaming taste has changed since then.

As long as it's not a spinoff or a mobile game then I wouldn't say no.

Can we first get Shining Force 3 translated and cleaned up for the current generation please?

For the love of god, please, new Treasure and Camelot games on Switch.

It'd be nice if camelot revived some of their IPs but it would be sweet as heck if they revived golden sun and made high poly models and good visuals for Switch. I'd buy that in a heartbeat, for sure. If not, though, I guess I'd check out a new shining force game.

One day those promised treasure ports will continue coming to steam ;-;

Ikaruga couldn’t have tanked that bad to not at least cover costs right?

Damn it. Why'd they have to do this to me?

I never played Golden Sun: Dark Dawn despite the first two games being my all-time favourite JRPGs. Somehow the idea of continuing that story just didn't appeal to me.

But Golden Sun still is my favourite JRPG of all time though, so I am absolutely down for any RPG Camelot makes.

Well yeah, not like one of your most hyped RPG series is stuck with a cliffhanger since 8 years.

i mean a proper genesis mini would be dope too, but in a world of animu fire emblem, we need more shining force so very badly

related: if anyone sees Premium Disc for a good price, holla!

PS: much love to shining force central, im still working on SF III ep 2 thanks to y'all

I'd be all over this! Shining Force 3 was one of my favorite games of the 32 bit era, I'm still bummed that we never got chapters 2 & 3 here. I struggled to play chapter 2 with a translation printed out from gamefaqs but never finished it.

I'd love to get a translated updated sf3 package too, but that may just be a bit more work than they could get paid for these days. I know we're a small fan base.

I've played Dark Dawn, but it'd be better to just reboot Golden Sun. That flashy, fast combat in HD, it would be incredible.

CognitiveAtrophy said:
I'd rather a Shining The Holy Ark sequel/spiritual successor, but I certainly wouldn't be upset at the prospect of another Force.
Click to expand...
Click to shrink...

Oh hells yes. Holy ark is awesome. Reminds me to start playing it again on my Saturn.
I could go for a sequel to that and SF4.

Holy Ark had terrible balance for the casters towards the end of the game.

That said, I think it is hyper unlikely (outlined in my Media Create post). I wouldn't mind if it happens though.

Celine said:
Nope, it's just that many years ago Capcom was publishing one of their golf game so fans speculated that maybe Camelot could be doing a new Breath of Fire too.

What's interesting about the interview above is that Takahashi bros. confirmed how part of Camelot's RPG team defected around 2005.
Click to expand...
Click to shrink...

Shining Force is cool but I wish Camelot would do a new Golden Sun (which is not likely since the last one bombed).

Would be wonderful. I wonder if any of the people they fell out with at sega are still around?

I'd also love a SF3 remaster with all three scenarios & pd content. Best SRPG of all time.

Y'know what'd be amazing on the Switch? Golden Sun 4. :D

Heck, I'd settle for a remake of the first two combined with extra dungeons and whatnot.