Both "Into the Spiderverse" and "Birds of Prey" quickly became some of my favorite comic book movies of all times, not just because of their unique esthetic, fun characters and more authorial voice compared to the MCU, but because both have an incredible album and score accompanying the action on screen. When a movie have a memorable soundtrack attached to it, it not only makes the scenes more dramatic or flashy, it also makes the whole experience of the movie stick with you for a longer time. Every time i hear a music from the Into the Spiderverse soundtrack i immediately remember the scene from the film where it played and suddenly all the feelings i felt when watching it come back to me. Does anybody else also feel emotional when they hear "Whats up danger" play? That's the kind of effect a good soundtrack have on you.

If you want a more in depth analysis about Spiderverse score you can check out Sideways video about it (subscribe to the channel people, it's very good!)
But one of the elements that i love the most about it it's how Pemberton blends both the album music and his score through his compositions, something that movies scores rarely do.
Wich finally bring us to Birds of prey.

Daniel Pemberton during a interview with the website Fandom said:
Birds of Prey is also filled with a number of songs, from Charlotte Lawrence’s “Joke’s on You” to Maisie Peters’ “Smile,” and Pemberton was excited to mix his score up with the playlist.

“I co-wrote [“Joke’s on You”],” he explained. “I scored that scene which is at the beginning of the film, at Ace Chemicals . I’ve always been keen at really blurring the lines between songs and scores. Because right now they seem very disparate. You’ve got the songs in a movie and then someone else working on a film score when really those two worlds should be working together in tandem. So I was pushing for that quite a lot. So ‘Joke’s on You’ really came from that. I wrote with this other songwriter named Imad [Royal] and we turned that into a song. The score was just the instrumental part of the song and we worked together to give it lyrics and turn it into a track. That hopefully makes it feel really fresh. Like, it only exists in Harley’s world. We did a bit of that a bit in Spider-Man, but that was me really orchestrating over one of the songs.”
Click to expand...
Click to shrink...

For reference, here's Jokes on you: 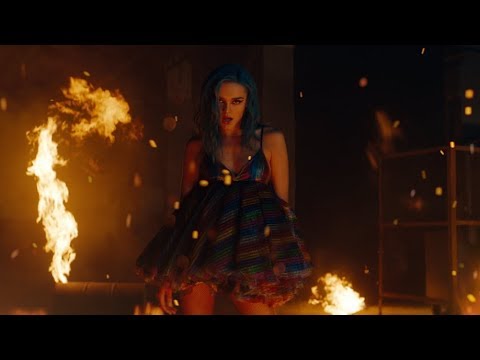 Charlotte Lawrence - Joke's On You (from Birds of Prey: The Album) [Official Music Video]

youtu.be
And, here's the movie main theme (it plays both during the opening credits sequence and a rearrangement of it plays during the ending):
It's so cool seeing this kind of cohesion in a movie soundtrack, but what really grabbed my attention was the quality of the track. I just love the western vibe that it evokes, showing that we are in for a story with characters that have a reprehensible sense of morality, but also the female vocals are so damn powerful, it seems as a scream of freedom in face of oppression, with is really in line with feminist vibe of the film. But that's not all, the score cover lots of different genres without losing quality or cohesion

Daniel Pemberton said:
“I’ve got this line I always say,” Pemberton continued, “that Harley could go anywhere, and be into all sorts of music. I could see her at the opera. I could see her in a mosh pit, like at a Rage Against the Machine gig. I could see her at a rave jumping around like crazy. At a jazz club. She could be anywhere and there aren’t really any other comic book characters like that. I kind of wanted her music to feel like all of these influences all jammed together. I wanted the music to be like her outfits, sort of crazy and out-there. Slightly mismatched styles that just happen to work together.”
Click to expand...
Click to shrink...

Daniel Pemberton during a interview with the website Fandom said:
Birds of Prey might document Harley’s violent emancipation from Joker, but it’s not a solo outing. Along the way, Harley collects a ragtag team of outsider friends, and they all come with their own special musical themes as well. “I think Harley’s energy exists throughout the film, but obviously you’ve got different characters too and so sometimes you’re stepping back and bit and looking at them” Pemberton said.
“Like Huntress is a good example,” he added. “Huntress has got that little flute riff and that becomes the theme for her backstory. Roman’s got these uncomfortable strings. Black Canary ‘s got a distinct whistling tune. The thing about this film is that there are so many characters and so many different elements that I think Harley’s the dynamite that sets it all off, like an explosion.“
Click to expand...
Click to shrink...

For more info about the soundtrack just check the whole interview he had with Fandom, it's really worth your time: https://www.fandom.com/articles/birds-of-prey-harley-quinn-score-music.

In Conclusion:
I created this thread because just like the movie it was made for, the soundtrack isn't getting the recognition that it deserves. Pemberton's score was released 4 days ago and almost no one seem to care and that's a shame because the score is freaking good. So in conclusion, listen to both birds of prey album and original score, and if haven't listened to Spiderverse soundtrack (album and score) also check it out, both are available on Spotify.

It's a fucking fun soundtrack. Haven't seen the movie (this weekend maybe?), but I can imagine storyboarding some of my own stuff to something like this.
OP
OP

Khanimus said:
It's a fucking fun soundtrack. Haven't seen the movie (this weekend maybe?), but I can imagine storyboarding some of my own stuff to something like this.
Click to expand...
Click to shrink...

Have you heard this one?Really love the vibe of it, hope you have a good time with the movie

I feel the score was drowned out by the pop song soundtrack of the film. After watching it last saturday, I only remember Black Betty being used and the film having an absurdly long music section in the credits.

Pemberton is pretty much the only current composer I can think of whose involvement alone is enough to interest me in a movie/show/game.