Do you think E3 is dying?

This tweet got me thinking about this. For decades E3 has been the gaming event, but ever since Nintendo pioneered not having a live conference, more and more players have been dropping out of the game, most notably Sony not even having a booth last year.

Of course, E3s already had its lows so maybe this year it'll break records. What do you think?

Yes and as much as I painfully don't want it to be true I have no argument against it.

Yes and it won't be missed. 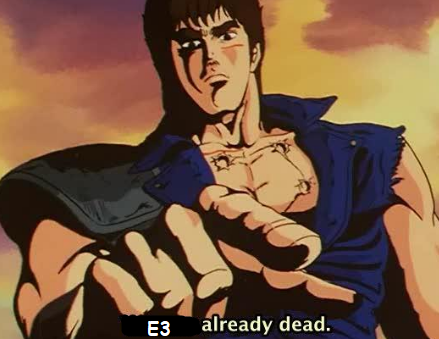 It has been for a very long time. Publishers don't need E3 anymore with how easy it is to get your message out there. It helps smaller publishers/developers to get press attention but E3 as the main industry event is done.

What has contributed to the decline though? Were they too restrictive with publishers/companies? Is it a rise in social media, so companies can disseminate their own message instead?

After the doxxing incident I kinda hope so to be honest.

There are no real downsides to the Direct format. I expect everyone to go in that direction eventually.

I think it'll shrink. Not sure about death quite yet, even after the doxxing incident last year.

I would of thought online views would be just as important a metric as physical attendance.

But E3 is not needed, it's nice to have conferences close together though.

It's run by absolute morons. I wish that they would get Keighly to take over, he could have the demos that go live during the event and more. He's got great ideas with The Game Awards. Heck, he could combine the two. E3 is a mess.

After the whole doxxing ordeal it should die.

E3 has been decreasing in importance since when Nintendo announced that they rather have a video on youtube/twitch than a live conference for journalists in .... 2013

Yes, I think because you have so many channels and streaming now, E3 isn't really special any more. And honestly half the fun of E3 was seeing them making a fool of themselves like dancing at Wii Music or "Ridge Racer!" You can't reasonably ask them to put on a circus every year. They're executives, not entertainers. And some of the classic and charming personalties like Iwata sadly passed away and Reggie no longer works for Nintendo.

Not while she's still there.

If Sony is indeed skipping it again, in a year where they'll no doubt have huge announcements to make (unlike last year), then that's royally going to hurt E3.

I think E3 will change in size and scope, but it won't outright die.
OP
OP

Anthony Hopkins said:
I would of thought online views would be just as important a metric as physical attendance.

But E3 is not needed, it's nice to have conferences close together though.
Click to expand...
Click to shrink...

Having a conference / booth is expensive though. They can have the online views with a direct

Sadly, yes. It was my favorite time of the year, but I guess it won't be long now until it dies off.

Morrigan said:
After the doxxing incident I kinda hope so to be honest.
Click to expand...
Click to shrink...

My thoughts as well.

Remember when people thought Nintendo were shooting themselves in the foot for not having an E3 conference in 2013. Foresight was 20/20

I kind of expect E3 as it is to die at this point, yes. The question is how much of a need for the other part of E3, the mingling of developers, publishers and retail, will remain with stores like GameStop also being in decline, especially when it comes to selling video games.

I could see GDC absorb some of the interdisciplinary mingling, or maybe something new, but I just don't see a future for E3 anymore.

The only thing I can see E3 be useful for is getting more mainstream press to talk about games, but there has to be less expensive ways to do that.

Yes it's always a time to look forward to, but mostly it's the press conferences I always look forward to. Nothing is stopping the big companies to hold their own event to show off new games.

Zenimax has tons of money, they can have their own show around the time of E3 and the same goes for all other big boys. Right?

It will continue to dwindle but still continue to be an event for companies to announce new stuff. I expect it will become more on the level of something like gamescom as time goes on.

Can you get the Platform holders back?

What do you need to change to do it.


The videogame industry gets a weekend where all eyes are in it. There is reporting in mainstream media outlets.

Like GameStop and having a presence on the high Street and in malls, when it's gone, it will be missed more than people realise.

It's just too important/big for folks to just abandon ship. There'd have to be a VERY massively marketed successor to even hope of luring big companies towards it rather than E3. Sony's decision to skip could bite them in the ass, it remains to be seen.

To me E3 is just literally ingrained as the "Christmas of Gaming" event held every year before summer. Like even non-gamers/casuals know it as such I'm sure. It's reported on every year in newspapers and non-gaming outlets no?

Nintendo for one would have to completely rethink their strategy. Would they go back to what they did in Jan 2017 and hold special playable events, MAYBE with a live conference format again? They'd need something big and flashy to tell the world that they're there. E3 did that already easily IMO. But Nintendo would have to do it all on their own if E3 wasn't around.

Problem is with the organizer and really with how times have changed... Look at Sony's WIRED Articles they pretty much talk about the hardware and software.

Game announcements? You can do a State of Play like or even a whole EVENT to cover a NEW GENERATION.

I really love the "year event" too look forward too but if MAJOR names like Sony & nintendo keep dropping support... Alongside some other big 3rd party like EA and Take-Two... It gets to a point to why it matters?

Lant_War said:
Having a conference / booth is expensive though. They can have the online views with a direct
Click to expand...
Click to shrink...

Directs don't get as much media attention and fanfare as big conferences though.

Yes and no. The convention itself is dying but I expect MS and Sony to follow Nintendo and have their own direct style videos/livestreams around the same time E3 normally happens. It's more of an evolution rather than an extinction. The direct style format is just the future.

They probably deserve to die after the doxxing stuff last year, but I assume it will just slowly shrink. E3 still has too much mindshare and hype behind it to die in the short term.

In the future, I see it evolving into being more like Gamescon or TGS, more regional events with more fan attendance that still have the occasional big announcments but aren't the main event of the year.

Kalor said:
It has been for a very long time. Publishers don't need E3 anymore with how easy it is to get your message out there. It helps smaller publishers/developers to get press attention but E3 as the main industry event is done.
Click to expand...
Click to shrink...

This is true, but I still loved to watch Nintendo's Treehouse. Devs having time to presenting and play their games is really great. Conference / Direct are now full of small trailer, gameplay isn't that present anymore.

I prefer a good streaming of upcoming things.

Pretty evidently is at this point.

Kinda... which is a shame because I love making an event of it.

It's a shame, I always looked forward to it. But the doxing was inexcusable.

There's no reason to hold on to it. The ESA is a bunch of fucktwits. I wish them nothing but failure.

All bigger companies should host their own conference in online format, to be honest, but I'll miss the E3 conferences weirdness though.

I think this will force a dramatic change on what E3 means. I don't think it will die but it will be completely different a few years from now. Mostly about third party and indies.

If Microsoft leaves then maybe, but they won’t

If MS leaves, its pretty much all over. They do have their own arena and aren't on the show floor at all, so they are kinda cheating tbh.