Would they make Nils a Manakete? Iirc, he didn't transform in Blazing Blade.

A few days with the Feh Pass and I'm very happy with it.
Auto start is amazing and a gamechanger. Can't wait for Resplendent Heroes of characters I like though, since I hate both Lyn and Cordelia.

My main issue (outside of the price and the lack of content) is that I'd rather the Resplendent Hero be an alt than a costume. I don't like that I can't have Lyn and Resplendent Lyn sitting next to each other in the barracks.

Valentine's banner was very kind to me. I got an Alm, Faye, 4* Conrad (with terrible IVs) on 35 orbs.

Having the indicator for an item to grab due to Feh Pass rewards is dumb as shit.

Actually threw in 40 orbs after all.

Still, this video is on point.

Free pull from the Valentine's banner was 5* Conrad with +HP/-Atk. It's something?

Day 7 BHB banner gave me another Hilda lol! At the very least, I now make her HP bane disappear!

I feel a little silly grinding out that 1000 foe quest beforehand when I could have just waited for Tempest Trials, now that I've learned about the changes to Continuous Auto from the last patch.
Ah well, live and learn.

After the Mythic banner was a bust, managed to get a Duo Alm/Celica (+SPD/-DEF) after 20 orbs. The Duo streak is going to be broken one day - but it won't be today.

Lone_Prodigy said:
Some decent refines but who has 11 Barsts to merge?
Click to expand...
Click to shrink... 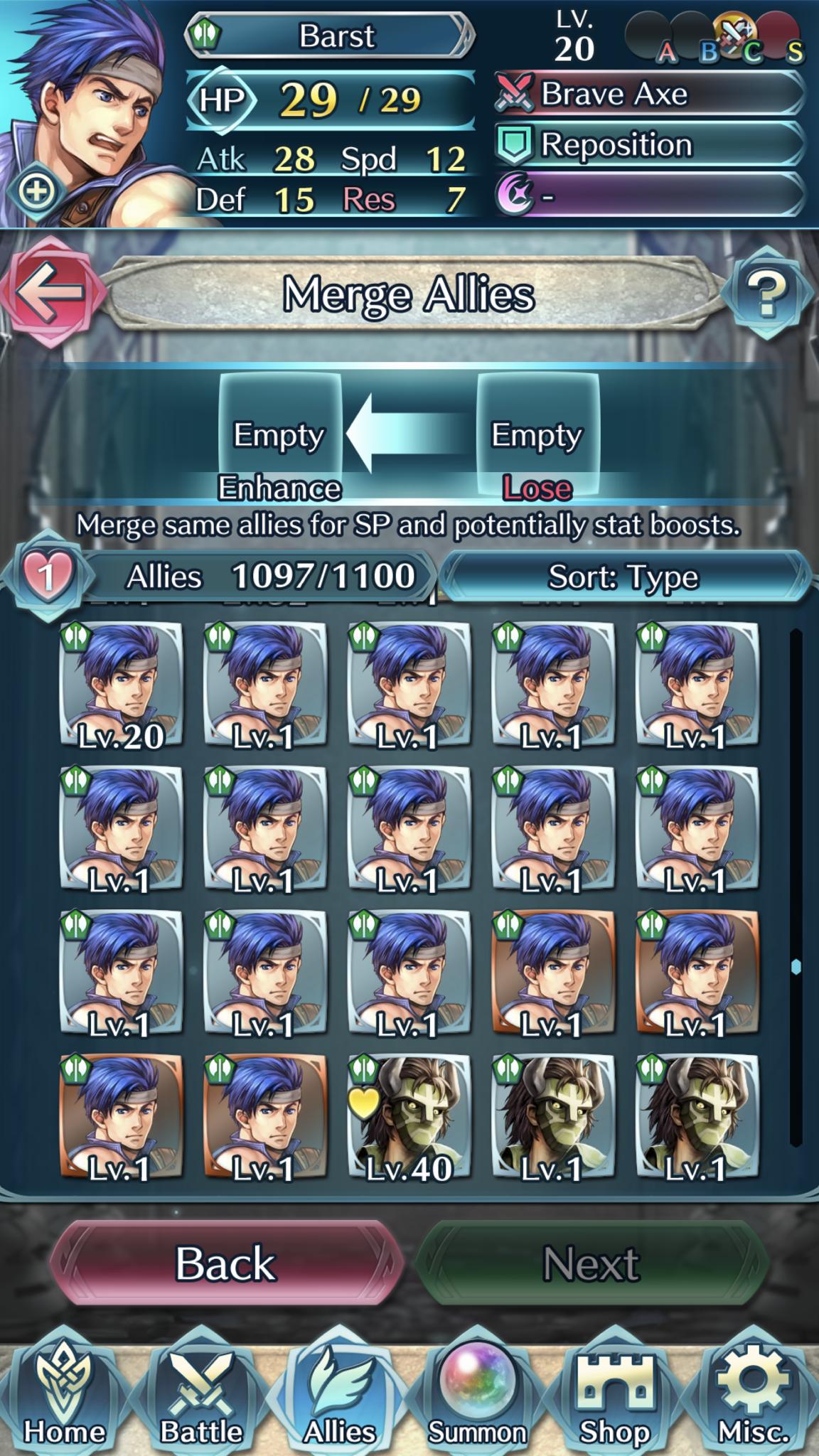 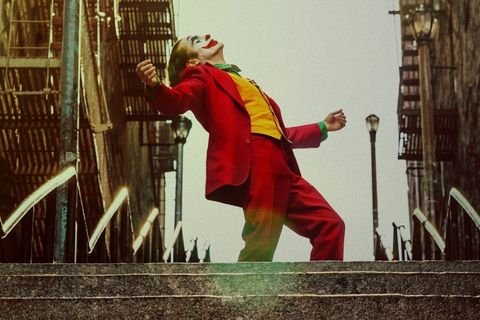 Tempest Trials going smoothly so far. Curious to see how effective V!Silque can be as a support unit whenever I get around to building her.

HotsauceDragon said:
I feel a little silly grinding out that 1000 foe quest beforehand when I could have just waited for Tempest Trials, now that I've learned about the changes to Continuous Auto from the last patch.
Ah well, live and learn.
Click to expand...
Click to shrink...

And Baladium, any build planned for Barst?

1100 in your barracks and zero manuals is the more impressive feat.

And got another Tana from the first CYL2 ticket!

Got a Valentine's Alm in 9 orbs! Now to continue saving for the eventual Three Houses banner.

Rate-up is a lie.

Following the 180 orbs I spent on the New Year’s banners with only three dupes to show for it, my worst streak of awful luck (by far) continued into the first Hero Fest banner as I pulled my last-minute summons. I even managed to break my two-year-old record of 61 consecutive pulls without a 5-star.

I hope to Naga I don’t break it again, for the sake of my stomach.

I doubt anyone here had worse luck on this accursed banner than I did: 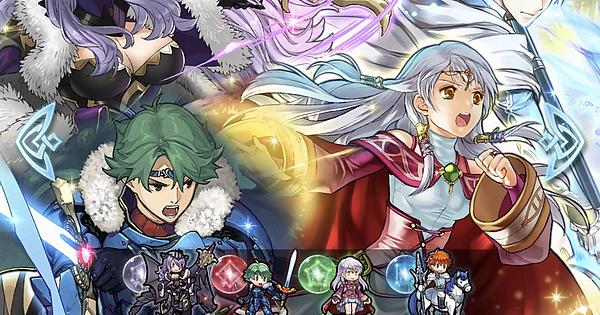 
Fear and wonder said:
I grinded half of the quest and left in-game feedback to complain that the quest would interfere with auto battling the tt+

Hmm. Ross is my next axe infantry build primarily because of how high his BST is (and Sacred Stones bias) and will eventually replace my Raven in arena, so I’m not sure what use I’d have for Barst outside of arena assault and I already have 9 other 5-star axe infantries. Plus I generally don’t promote units unless I’m planning to +10 them or fodder them off.

And hey, I like having a ton of Reposition Man stocked up just in case. ;P

Lone_Prodigy said:
1100 in your barracks and zero manuals is the more impressive feat.
Click to expand...
Click to shrink...

I’m an unabashed gacha hoarder. If they ever raise the barracks cap to 2,000, I’ll expand it again immediately without hesitation.

Plus sorting through units trying to figure out which ones to keep for fodder and which IVs are optimal to save is a pain in the arse. So having 900 extra slots would allow me to procrastinate the next purging session for months. lol

I don't know how many orbs I spent but it went up to more than 10% on that same banner.

My deepest condolences and empathy to you.

It hurts to see so many orbs that you’ve worked for go to waste. -_-

Uh, I actually haven't expanded my barracks at all. But given I've been hovering around 280-290 units for the past month or so and have been creating manuals at every opportunity, I'm thinking that may have to change soon.

I have expanded my barracks a handful of times, I'm at 330 space now, at the moment I have 256 5* units so I max out my barracks pretty often, honestly after they introduced Combat Manuals I see 0 reason to expand again.

And this one seems news. A Double Special Heroes summoning focus on 2/18.

I've never expanded my barracks, I haven't needed to yet, thanks to manuals.

Was really wondering if that’s the case. Too many leg/mythic heroes be-ith in rotation!

New heroes next week tuesday, i wonder if it's a single game related theme with Blazing Blade and Nils, or if it's mixed game and Lysithea is there too after her appearance in the latest Feh Channel.

Yesterday was kinda crazy for me in terms of pulls.

Free pull on Weekly banner was Ephraim... also pulled a 2nd Ephraim on the first circle (+Atk even!).

Today I got Nino though, but it was still nuts yesterday.

It finally happened, guys. After three years of playing this game... Hector has arrived. +Spd, -HP.

...I instantly starting wondering who in my barracks will benefit most from Distant Counter.

I see the playerbase is already meme-ing Feh Pass into oblivion via questionable usernames...

i forgot to summon on the brave hero fest banner RIP 6 tickets.

Aw yiss I got top 6k on AR for the first time. I'm coming for ya, golden throne!

(I could really use more Eir merges)

I see the playerbase is already meme-ing Feh Pass into oblivion via questionable usernames...
Click to expand...
Click to shrink...

I really hope that word is "No", but I sadly have seen this movie one too many times.

I got random Deidre from the Hero Fest ticket today. I forgot she was even in the summon pool still. Weird how I'm up to 3 Deidres now and have never summoned a Julia yet. Julia is too standoffish.

It finally happened, guys. After three years of playing this game... Hector has arrived. +Spd, -HP.

...I instantly starting wondering who in my barracks will benefit most from Distant Counter.
Click to expand...
Click to shrink...

Congrats! Good luck deciding who to fodder him to.

And my 3rd CYL3 ticket gave me Elincia! RES+/SPD-, so just going to merge to my neutral one.
Last edited: Tuesday at 2:16 AM

Shaymin said:
I really hope that word is "No", but I sadly have seen this movie one too many times.
Click to expand...
Click to shrink...

Would make for a highly controversial movie, I’d reckon. lol

I’ve seen other usernames floating around like “FucFehPass” or similar, so I wonder how IS moderates stuff like that. I’d imagine maybe they’d manually change it back to the default “Kiran” and issue a warning to the offending account? And then a repeat offense would mandate a ban?

I see the playerbase is already meme-ing Feh Pass into oblivion via questionable usernames...
Click to expand...
Click to shrink...

The thing such galaxy brains are doing to me is not making me criticize the Feh Pass further, i think i've done that enough, but wishing they would get a fucking ban.

You're mentally not mature enough for me to interact in an online ecosystem if you think that insulting a part of humanity is a valid way to express criticizm against some optional subsciption shit.
And i'd question if you're ever going to be mature enough for that.

AR creep in Light season is getting ridiculous. No Eir merges so I scored 160 every battle. After doing the calculations, I was 60 lift from a perfect offense with 2 ladders left. I don't remember losing any units but I did switch to a lower scoring team a couple times. Lost 120 on defense which was fine since I have 1 Sothis and no Yune.

That was almost enough for T27 but no golden throne.

Btw. how's the TT going for you guys and gals?

Using the absolute lamer team for this, Celica and 3 dancers and i think i've never cleared the runs so fast.

WSothis+1, Duo Alfonse, you park those 2 anywhere and they clean up everything, L-Azura for movement and normal Silque as bonus unit and to heal if something does go wrong, don't think I needed to heal so far though.

Autobattling TT with Virion, Tharja, Surtr, and Alm. Over 125K right now and barely maintaining top 1K, which is highly abnormal (usually this score is rank ~250ish at this point). Feh Pass will end up making me guzzle more stamina potions than ever before, I'm afraid.

And my ninth Bantu merge. So basically, Bantu is going to be the first unit I merge up seriously as an arena core member.

I know itsuki/astram score better, but not spending grails, and i doubt I'll see a +10 Ross/Echidna/Valbar for at least a year.