[Major Spoilers] One of the endings in Catherine: Full Body gets extremely transphobic... moreso than that original (OP Updated Feb. 17)

Catherine does not explicitly state anything about "making everyone's lives better", however that is heavily implied. She wanted to be with Vincent under different circumstances. She took him back in time and dated him in high school, and they go on to get married years later, in the time when the game's events would have taken place in that timeline. At the wedding, almost everyone else's lives are improved. Paul, the guy that died at the beginning of the game in both this version and the original, is alive and dating Katherine. They are happy. Vincent and Catherine are happy together. Erica for some reason has not transitioned in this timeline, and we do not know if she will in this timeline. Tobey says that he wish he met a girl like that, referring to Catherine, and Erica (pre-transition) puts her arm around him and says "She may be closer than you think", as a "joke" about her having transitioned and dating Tobey in the other timeline.

There's also transphobia involving Rin. The thread wasn't originally about that, so I will spoiler that below.


Rin is male but a crossdresser, and ends up in Vincent's bedroom and he discovers Rin has a penis. He freaks it and slaps Rin's hand away and she runs off. Now the issue here is that they are going with the "trans panic" route, implying Rin was trying to trick him. Rin is also in fact an angel, but angels look like these pink minion-like creatures.
Original:

So the following is MAJOR spoilers for an ending in Catherine: Full Body. If you don't want to know, turn back now. 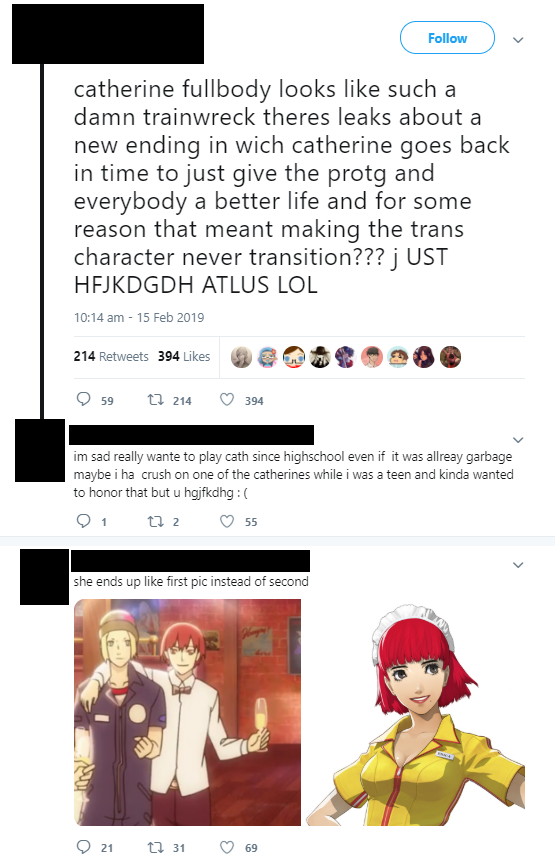 This got more transphobic, with making Erica never transition being one of Catherine's different circumstances. In the original game, one ending revealed that Erica was trans, and this was handled poorly. Only men have the dreams, and she had them too...therefore by the game's logic, she was considered a "man". There was also that whole thing where Tobey lost his virginity with her and eveyrone basically turned it into a "haha you had sex with a man" transphobic "joke".
Last edited: Feb 17, 2019

ATLUS really sucks with this shit

This might honestly be the most offensive thing Atlus has ever done.

Jesus Christ. And here I thought we dodged a bullet when Rin's "twist" was revealed to not be what we all worried/assumed it was going to be. Atlus really needs to get a handle on this shit, though at this point I think I'm done giving them second chances.

Are you fucking kidding me.

Holy shit. That is fucking awful. The original was bad enough, but nothing compared to this.

I knew it was stupid of me to hope they wouldn't make it worse.

I love this game (well, the original anyway) but this is seriously such a fucking ugly stain on the whole thing. Was playing some today and the way some of the characters talk about her is just... not... good...

Yeah this game can get fucked, don't support this shit.

How can Atlus keep making games that try to be progressive and not have a single fucking idea about sexual orientation and gender identity, they keep fucking it up in the Persona series as well.

I'm guessing Atlus don't know a thing about what being trans is.

Atlus has been fucking up with LGBTQ representation in their games for a while. Fucking shameful.

I remember when this was first announced people were hoping they'd do Erica justice this time.

No excuse for this shit.

And we thought the worst they’d do was make Qatherine trans for “lol gay panic” jokes, this is much much worse :|

I know it can be use right, but in most cases time travel is a stupid plot device that only leads to more confusion.

That's awful. Erica was a cool character in the original, and she wasn't treated very well. This is just disgusting. Maybe Full Body just needs to go onto Era's ban list.

Probably the protagonist didnt know about her past and backfired turning her against her will?

Really sucks for her

biggest question is how with Atlus USA tackle this. probably ignore it and wait it out. there's no way to defend this, unless they edit it to be less offensive

How have they not fucking learned their lesson.

Welp, saves me from buying this when it releases. No tolerance for this bullshit anymore, Atlus.

It's sad, disgusting, but unfortunately not unexpected that Atlus continues to treat LGBT characters in their games like garbage. I wish they'd make an effort to improve, but it looks like that won't be happening anytime soon.

At least this time I know beforehand, so I safely skip this one.

Samaritan said:
Jesus Christ. And here I thought we dodged a bullet when Rin's "twist" was revealed to not be what we all worried/assumed it was going to be.
Click to expand...
Click to shrink...

From the import thread.

RikuDawn said:
Rin IS an alien. But their human form apparently has a penis. I don't really know too much beyond that.
Click to expand...
Click to shrink...

Weiss said:
So apparently what the new ending is going for is that


Erica isn't actually a woman, but rather a gay man who transitioned, and Catherine "improves" her life by traveling back in time so that she comes out as gay.
So basically it's as bad as it sounds.


According to what I've read Rin identifies as male and crossdresses, and yes is an "angel" who in this setting are little pink aliens, and there's a new route for marrying them.
Click to expand...
Click to shrink...

Jesus Christ. And we all thought after the Rin spoiler we were free of more of this shit...

Hashino is a hack. Don't support his shit.

Fuck off, Atlus. Catherine was one of my favourite games last year but I'm not buying Full Body because of this shit.

They somehow managed to make it worse than the original.

This is inexcusable. First the homophobia in Persona 5, and now this. It’s disappointing, because ATLUS used to be really progressive about sex and gender, but the anime tropes really sunk it.

Wait, ATLUS makes these games TOO?

Man I thought that Persona 5 stuff was wild but even this, made by the same people no less, wowwwwwwwww.

That's why we have dlc voices! Because Catherine went back in time to make YOU happy!

I'm assuming as charitably as possible that this was Atlus' attempt at addressing the criticism they got over P5's gay panic jokes and now we've got what may be the single most transphobic thing ever put to video games.

I'm going to sit in my corner with all my old Shin Megami Tensei games and you're welcome to join me.


BassForever said:
And we thought the worst they’d do was make Qatherine trans for “lol gay panic” jokes, this is much much worse :|

Though I did hear that Qatherine is
an alien
so maybe they try to have their cake and eat it too with some
trans-species jokes
Click to expand...
Click to shrink...

From what I understand
Rin identifies as male and crossdresses, and there's a new ending where he and Vincent get married

Who do we actually contact for adding a game to the ban list? If Atlus is really stooping this low for the re-release, I don't see why Era should allow it.

Wait so there's no way to end up with transition her?

Atlus must have the worst recent track-record of any major dev when it comes to handling LGBT+ issues.

Are you fucking kidding me?

I know the tweet was already posted in the other thread, but I wonder if it would be a good idea to remove the tweet itself and just have a censored screenshot.

That user seems like a relative nobody and I’m not sure they’re going to want the attention this thread will bring them.

Yeah normally I’m the first to defend Atlus but this is a big no from me.

ARE YOU FUCKING SERIOUS. Oh my godddd...

Are we boycotting P Studio now, or just this game?

HylianSeven said:
Only men have the dreams, and she had them too...therefore by the game's logic, she was considered a "man".
Click to expand...
Click to shrink...

According to the game's logic, men are supposed to settle in a relationship with women for the purpose of procreating if I remember correctly. It's not difficult to see how "Eric" becoming Erica would mess with "his" intended role as a man in the eyes of the gods, and thusly Erica is cast in the same group as men not living up to that expectation.

I don't see how any of this holds up with these new bizarre endings however.
Last edited: Feb 15, 2019

I almost bought the original on playstation 3 years ago (was cheap on sale), now I'm glad I skipped it and never supported this stuff.

Is this just a Japanese cultural thing? Like how blackface is still a culturally accepted depiction of black people in drawings?

Chie Satonaka91 said:
Who do we actually contact for adding a game to the ban list? If Atlus is really stooping this low for the re-release, I don't see why Era should allow it.
Click to expand...
Click to shrink...

Allow what? Talking about it? I don't see the point of banning games on Era, but this revelation makes me no longer want to double dip on this game. Not worth getting a new version when the changes don't sound like improvements.

Weiss said:
I'm assuming as charitably as possible that this was Atlus' attempt at addressing the criticism they got over P5's gay panic jokes and now we've got what may be the single most transphobic thing ever put to video games.

I'm going to sit in my corner with all my old Shin Megami Tensei games and you're welcome to join me.


From what I understand
Rin identifies as male and crossdresses, and there's a new ending where he and Vincent get married
Click to expand...
Click to shrink...

So it’s one step forward five steps back.

The optimist in me hopes this was Atlus trying to address critique from the original and really missing the mark. But this is still a bad look.

fuck this shit, no longer buying this game. this is some of the most horrific shit I've seen in a game

Oh, geez. From bad to worse.
Seems like they don't understand their western audience at all.

Atlus is never going to change. God damn it.