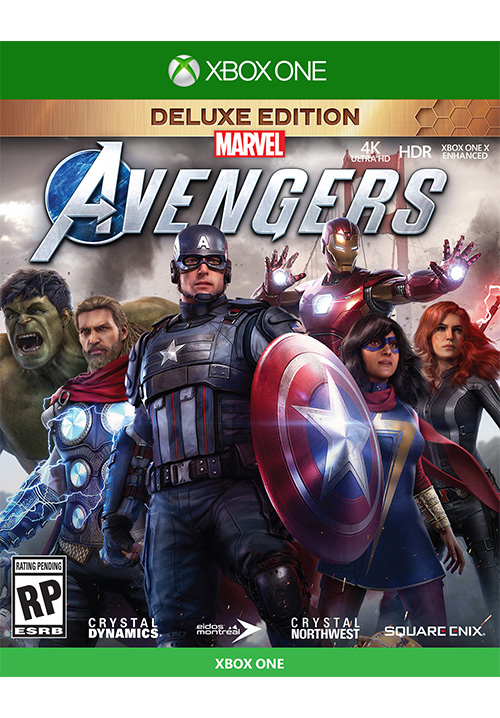 Swing and a miss

It happens so often with them you can’t really blame the reaction.

This art style was the WRONG way to go. Good lord.

The models in this game look like they were made in the Soul Calibur VI character creator.

No seriously, when are we gonna see some coop in this coop game?

MegaSackman said:
No seriously, when are we gonna see some coop in this coop game?
Click to expand...
Click to shrink...

I think we're likely going to get full blowout of the game around E3.

Benzychenz said:
The characters are ugly yeah, but the art style in general is just lacking.

It's a comic book game, make it colourful and cartoony. Spider-Man got it right, this looks like the peak PS360 era muddy brown 'realistic' art style.
Click to expand...
Click to shrink...

I would not describe Spider-Man as cartoony.
Last edited: Feb 13, 2020

litebrite said:
I think we're likely going to get full blowout of the game around E3.
Click to expand...
Click to shrink...

Oh sure, considering the delay I asume a big push it's coming and I'm sure coop will be a big star. I'm just surprised that it's on sale already when they haven't showed anything about the multiplayer while it was one of the main aspects of the marketing speech.

Don't get me wrong, I'll prefer my games single player and I'm almost convinced to get this but I'm just surprised by this game everytime in the most confusing ways.

No but it still has exaggerated colours and doesn't strive to be 100% realistic.

Metacritic in the 60s.

Iron Man is not far off

This game looks like proof that you can't be two things at the same time. You can't be an alternative version of the Avengers, completely removed from the cinematic version, and still maintain roughly the same core members with a lot of their designs veering dangerously close to the movie's vision of each. They needed to be way more different, or they needed to pay out that money for some big budget likenesses. Instead they set their tent up somewhere inbetween and it ain't working.

This still looks so bad. Good luck Crystal Dynamics, you're sure gonna need it.

They should have gone for a hyper stylized art direction and focused on large scale super hero spectacle. This just looks bad/bland compared to Spider-Man and even Arkham Knight, which is a 5 year old game.

TheGhost said:
It happens so often with them you can’t really blame the reaction.
Click to expand...
Click to shrink...

Yeah i don't think so. Best to do even some research before hitting enter on some console war comment

Its amazing how they took one of the hottest properties in entertainment right now and made it look like the most blandest shit ever. Hoping for the best for CD cause they sure could use it being saddled with SE and all but boy this sure ain't it.

Hated the game got delayed but still hype for it. So far it’s looking good, hope they keep showing more and more of it. Know it’s not open world but just interested in how certain characters move around the map they’re in.

I remain underwhelmed. Hopefully this turns out to be amazing, but it's not exciting me yet. Shit like 72hr early access doesn't help either.

People really need to get over them not looking like their MCU counterparts. That being said the game looks bad regardless lol.

Not the slightest chance of happening.

I wonder if that's just an error

This is gonna tank hard

I don't know, with the success and acclaim of more mature-rated properties, especially Batman, I can see them doing a light-M rated game featuring a more popular Marvel character

Keep telling yourself that.

Game will bomb. Nothing about it seems special or interesting.

What is even the online in this game about?

rated m on the deluxe picture??

I know it isn't just me, but do those Obsidian costumes... Suck. Like really badly suck?

I don't know what they were thinking having those as the "special deluxe edition costumes" just made me go "Phew, not missing anything then"

It's going to sell extremely well and people are going to complain about it a ton.

It is a hot take I know but I think Crystal Dynamics might have fucked up big this time around.

PlanetSmasher said:
It's going to sell extremely well and people are going to complain about it a ton.
Click to expand...
Click to shrink...

It really is a matter of people needing to learn when to use Bomb vs Underperform. This will sell very well, fully agreed there. But if the reviews and/or Word of Mouth tanks, it's legs could be wiped, and wind up underperforming even with a huge opening.

Musubi said:
People really need to get over them not looking like their MCU counterparts. That being said the game looks bad regardless lol.
Click to expand...
Click to shrink...

Yeah not sure why people are so hyper-focused on this game needing to match the MCU likenesses in order to justify the realism angle, especially when the whole game chiefly revolves around Kamala Khan. I....can't even come up with a proper counter-example of how silly this comes off as, because I can't recall any comic book video game where this was such a massive stickler to the overall collective.

Making Thor's face look more like Hemsworth's wouldn't have fixed the initial reveal's jankiness as much as people think it would've, and if anything would've only further highlighted just how much Willingham's Thor does not (and never has) sounded like Hemsworth's.

spad3 said:
Apparently Vince Napoli, the guy who worked on GoW's combat, is working on this game, which is how Thor's Hammer is probably going to function similarly to Kratos' axe.

Yea the art style is hideous. I get what they were going for but they should have pivoted when they saw what their superheroes looked like. I hate the costumes/faces.

Yeah I just can't get over that art style and those awful uncanny valley character designs. It's so off-putting it's overshadowing everything else about this game. Going for photorealism can work - Spiderman looked great - but this just is not it.

Hmmm something still feels off about the game.
Whether its the seemingly unisnispried story, graphics or some weird character designs.

It being GAAS doesn't help sell me on the game at all too.
I'm very interested to see reception at release.

I just want to understand the general gameplay loop, and what the end-game is after you beat the "story". Like, what are we doing and chasing? It feels odd they've yet to answer of any of these type questions, unless they did and I missed it.

I still don't really like the designs or art but gameplay looks alright but need to see much more for each character before even considering this game. At least there's Kamala whose my favourite marvel character.

I don't think they look that bad. I genuinely think that the movies cast the characters so well and made them so iconic that it's very hard to remove yourself from that. In the comics they've looked different on many occasions for decades.

I really hate to be negative about this game. It looks like they've put in a lot of work, and it is so cool to see Ms. Marvel in a major videogame, but these bonus skins aren't really selling me. I think it is kind of a bad idea to take a bunch of colorful superheros with their own styles, and just slap the same color scheme on all of them. Combine that with how most of these characters look a little too similar to their MCU counterparts, and they just don't look that great.

Frankly I would probably feel a little more excited if this game wasn't being presented as an online Games as Service title. I loved Spiderman, and would have gladly jumped on this if it were something similar. Instead it seems to really want to push the multiplayer mode, which will never be a huge selling point to me. I'll most likely wait and see how well this game is doing a year after release. I do hope that everyone who pre-orders it gets a good experience though.

modiz said:
Sadly Its a pretty standard practice in the industry at this point...
Click to expand...
Click to shrink...

It really isn't, so far it was mostly EA tactic if I'm not mistaken, and usually the bad offenders of this bombed.
OP
OP

unicornKnight said:
It really isn't, so far it was mostly EA tactic if I'm not mistaken, and usually the bad offenders of this bombed.
Click to expand...
Click to shrink...