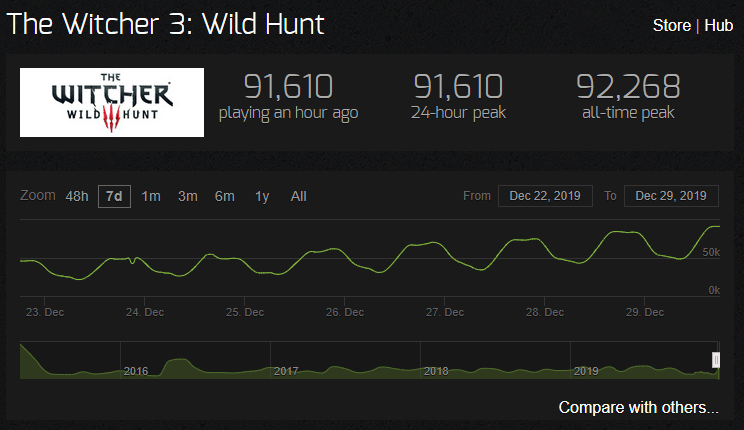 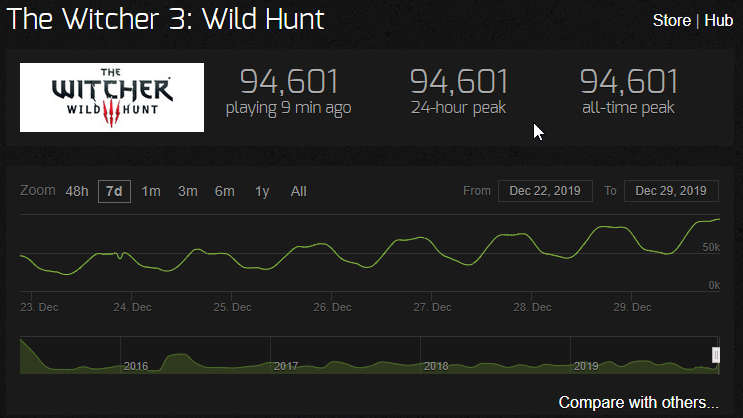 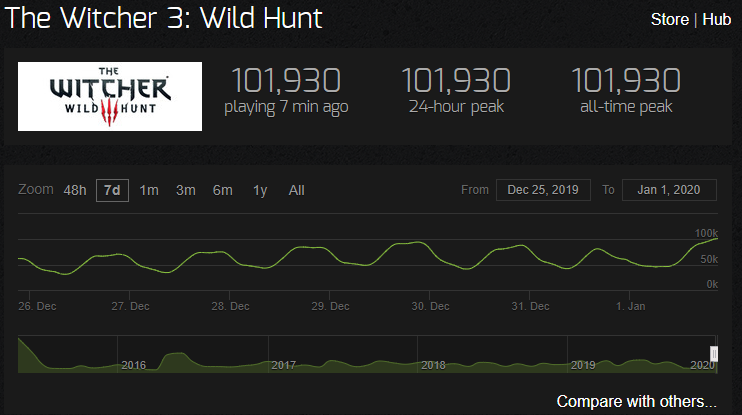 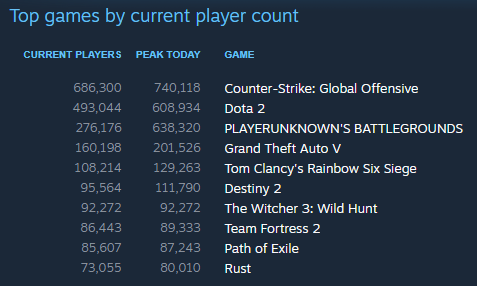 After all the hours I put into it, I won’t be going back but I know lots of people who have bought it due to the tv show.

I can't wait for the upcoming Cyberpunk TV show !

Good to see an already popular franchise become even more popular. The game and series as a whole deserves it.

So many people tossing coins to their witchers.

This reminds me, i still have a ton of side quests to do in that game.

What about sales? Is it selling again?

This makes me happy.

Best selling game on Steam Globally and on Gog.com.

The TV show is what prompted me to finally buy it. 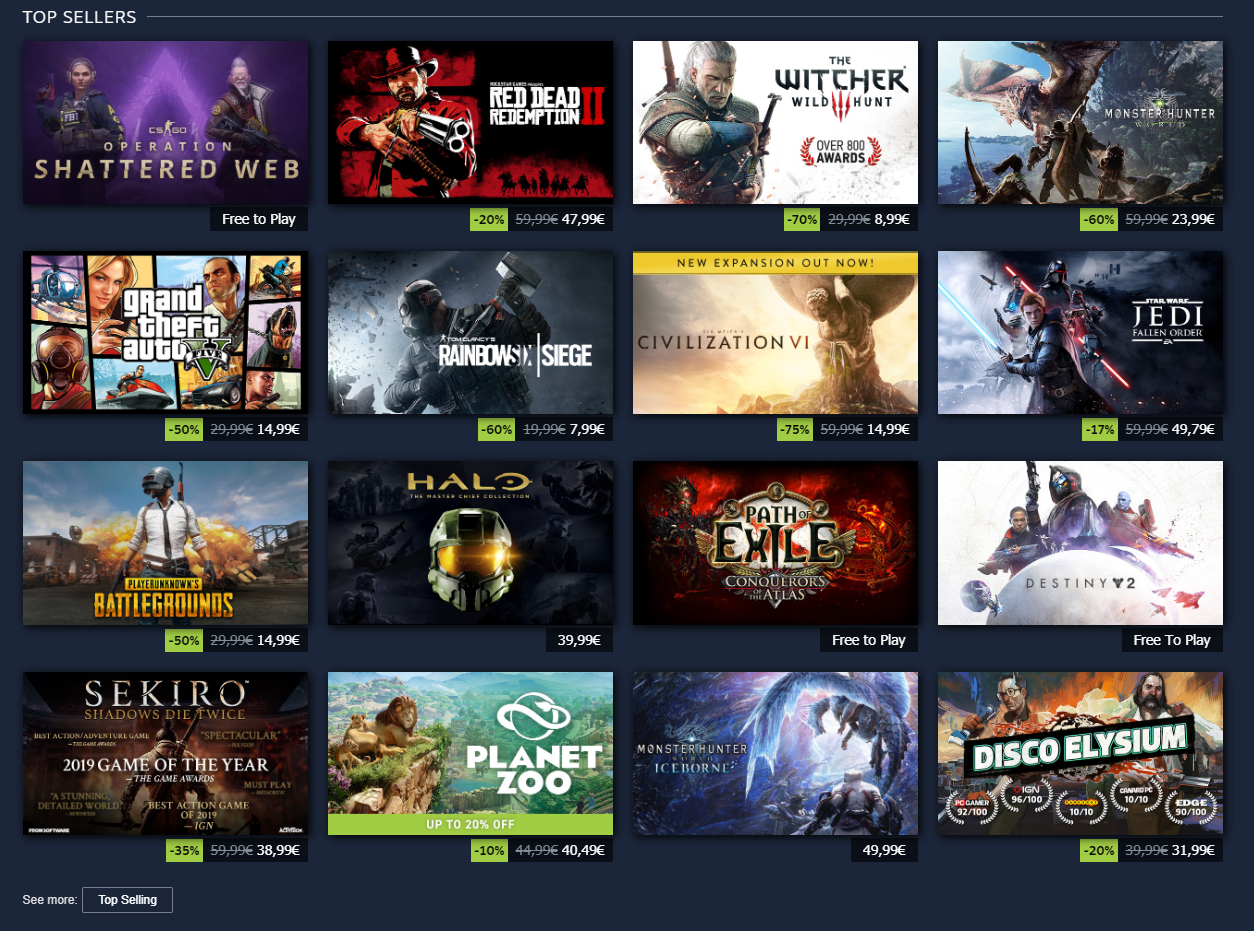 i mean, the entire show is arguably that anyway, but still.

Well, it's a good game, and while it's not the same as the TV show/books, it's not that far off, so it largely feels the same. I'm glad it's getting more of a resurgence.

Reminds me yet again that I still need to finish Blood & Wine.

It's top 3 games of this generation. I loved every minute with it.

Game of the Generation making a comeback.

Witcher 3 is gaming's most wholesome thing this generation, that seems to get all the attention when you wouldn't think that such a slow-paced, narrative RPG-thing gets such glory.

I mean, this is not the same as a Skyrim or a GTA, this is a hyper-popular nerd game and the mainstream is all over it.

My personal game of the generation (and decade), I'm so glad the Netflix tv show is pumping even more popularity into the game.

I've had this in my library for a long time. The Netflix show has me playing it lol.

Game of the generation for me. Glad to see it doing well and more folks are enjoying it.

Nice. More people getting to enjoy the game of the generation.

I have bought Witcher 3 day 1 and have never played it for more than 5 minutes because of the super slow introduction and combat tutorial....
Maybe now's the time?

Kinda crazy it was that "low" at launch really.

Might be my favorite game of all time. Such quality story telling.

Not at all since it was available on GoG for much cheaper.

It's really funny that for some reason people have been procrastinating on playing one of the best games of all time.

Most would've bought non-steam copy for cheaper. (and gog copy was bundled with nvidia GPUs etc.).

And it's a single player too while the rest are MP.

They have to be making Witcher 4 after Cyberpunk

painey said:
It's top 3 games of this generation. I loved every minute with it.
Click to expand...
Click to shrink...

I'd go so far as to say that I think Witcher 3 is the best open world game of all time.

I'm playing Blood & Wine myself right now. Shame there are no mods for Nintendo Switch button prompts as I'm playing with the Pro Pad.

Deserved. Is the show any good? I was a huge fan of the TW3.

Goat the whole finally can see this. No game touches this one..

Amazing game. It's just so long to get back into it, I couldn't bring myself to do it. So instead, I got back into Witcher 2 which I have not played in years, long enough it seems I've forgotten all but the most major story beats. Fantastic game, really still holds up quite well, even graphically (playing the 360 version on the Xbox One X). It still totally sucked me in and I ended up playing until almost 3 am last night without realizing it.

Spinluck said:
Deserved. Is the show any good? I was a huge fan of the TW3.
Click to expand...
Click to shrink...

I'd say its pretty good if you're a fan of the games, it seems to lift alot from the games.

Really helps that the holidays is the perfect time to tackle a slow burner 100 hours rpg. I finally started my first play through and I bought it maybe 3 years ago

It's one of the best games of the last 5+ years so well deserved. Hope lots of new people get to enjoy it. It's getting harder and harder to not play it again.

Man the series really did good for CDPR.

I'm still undecided if I should get it, liked the series but it wasn't anything special neither, and not sure I would like the game.

The show brought me back but I'm in PS4. I bought it with the season pass at release and then just couldn't get into it. I tried multiple times but it just didn't click. I know the characters better now and more of an understanding. I think I'll stick it they this time.

It’s nuts how popular that show series is. I do really like it, but it’s nowhere close to game of thrones.

Pretty much. I have so much to play but all this buzz has me wanting to go back.