Who knew that speculating the dates that we’ll be shown a new collection of commercials would end up being so fun when Nintendo first introduced the concept of a Nintendo Direct almost a decade ago? It’s crazy to see how far Directs have come. With that being said, welcome to the fourth official Nintendo Direct Speculation Thread! Being an ERA member since near it’s inception, I am honored to make the technically 6th Nintendo Direct OT on ERA! Who knows what treasures will be unearthed from Nintendo’s mysterious 2020 as we burn through another 20,000 posts….

I’ll be updating this OP constantly (especially the second portion) so check back every now and then! Also, the clean graphics are probably the most impressive part of the OT, so shout out and thank you to MondoMega for making them! And thank you to Phendrift for choosing me to do OT5 and being able to stay a lot of the layout from OT4 to this thread.

Of course, let’s get through the formalities of what this thread is. It's kind of a unique beast on ResetERA, and NintendoERA members early in the site's lifetime worked long and hard to get a reliable and official safe haven like this where we can run rampant with speculation. That said, there are some rules, moral and behavioral standards, and general guidelines that are needed for this thread to be the best and most fun place it can be. So, without further ado, here are some important documents from people who can all say it better than I can....

The Official permission grant from Nibel establishing the thread’s purpose:


The founding Charter from the first OP Kevin360 :


And finally, a new addition to the OP that I’d like to add from my direct predecessor, Raccoon. A request for what should be the ideal behavior and morals in this thread with regards to insiders and just general respectfulness to everyone:


Keep all of these in mind so that we can keep these threads going. Can't imagine how dark of a future NintendoERA would have without them...

This section of the OP is the one that I'll constantly update with discussion points for anyone who just wants to see what we've been up to. However, I'm going to organize it into separate lists of games that should hopefully be easy for you all to navigate. They will just be short little blurbs, so if you don't trust me, wanna know more or want sources to anything listed below - join the thread! Similarly, I won't do what the rumor thread does and say what insider says what. I'll just put "credible insiders" in order to avoid putting too much spotlight on those who don't want it. More importantly, I do not want to give ammunition to various sources that come here and lazily steal or misconstrue the rumors in this thread. If "credible insider" isn't enough of a confirmation for you and you want to know exactly what sources are talking about what rumors, feel free to ask in the thread. NintendoERA has some very committed members who are always up to date and will gladly answer you!

With us being in February now no general Direct has come yet in 2020, however Team January did win last month with the Pokemon Direct announcement, but now that we are waiting for the next general Direct we are all hoping it is soon, It is implied by a few people that we will be getting two Directs this month, a General Direct and a Animal Crossing Direct you say?

A Direct in February is likely as even without the rumors because Nintendo needs to lay down part of the release schedule for 2020 and reveal some games to give them time to breathe between reveal and release. Additionally, Animal Crossing preorders are opening in Japan on February 8th, and info on the game in general is needed. That could be in an AC Direct and the General Direct or just the AC Direct.

CONFIRMED GAMES IN GENERAL
They’re coming, but when…?

Pikmin 3 - Wii U port delayed to add new single player content
Super Mario 3D World - Wii U port
Metroid Prime Trilogy HD – some fuckery is going on, perhaps due to the delay of Prime 4. Consensus seems to be that it’s still coming though.
2D Metroid –reports seem to be conflicted on if it’s a remake or a brand-new game
Paper Mario - hinted at by insiders, reason to be "hopeful" (return to form? Remaster of first two?)
Halo – coming to the switch in some form. What game though? Hasn’t been said.
The World Ends With You 2 - should be coming this year, and not only to Switch
Click to expand...
Click to shrink...

Super Mario Odyssey 2 – following a Galaxy 2 pattern, likely to be an iterative sequel coming soon
Super Mario Party 2 – Mario Party usually gets put out quickly, 2 years since the first
Kirby - series is usually pretty frequent, and was absent last year with the exception of an F2P game. Star Allies was early 2018. We should get a new mainline entry or experimental spinoff this year
Splatoon Spinoff – the time is ripe for one with Splatoon 3 not coming soon, and that cryptic SOS image….
Mario Golf – probably what Camelot has been up to since Mario Tennis Aces
The Legend of Zelda: The Wind Waker HD - This would depend on when BotW2 is coming. If it's delayed past 2020, this could take it's spot
The Legend of Zelda: Twilight Princess HD - Same as above. Nintendo wants a Zelda every year, we think. If no BotW2, a port is likely.
Game from the Mario Kart team - their last game was ARMS in Summer 2017. Their next project should be at least showable. As for what it is, who knows?
Click to expand...
Click to shrink...

UNLIKELY GAMES AT THE MOMENT
You'll have to wait a little longer...

Thanks to Plum for this. 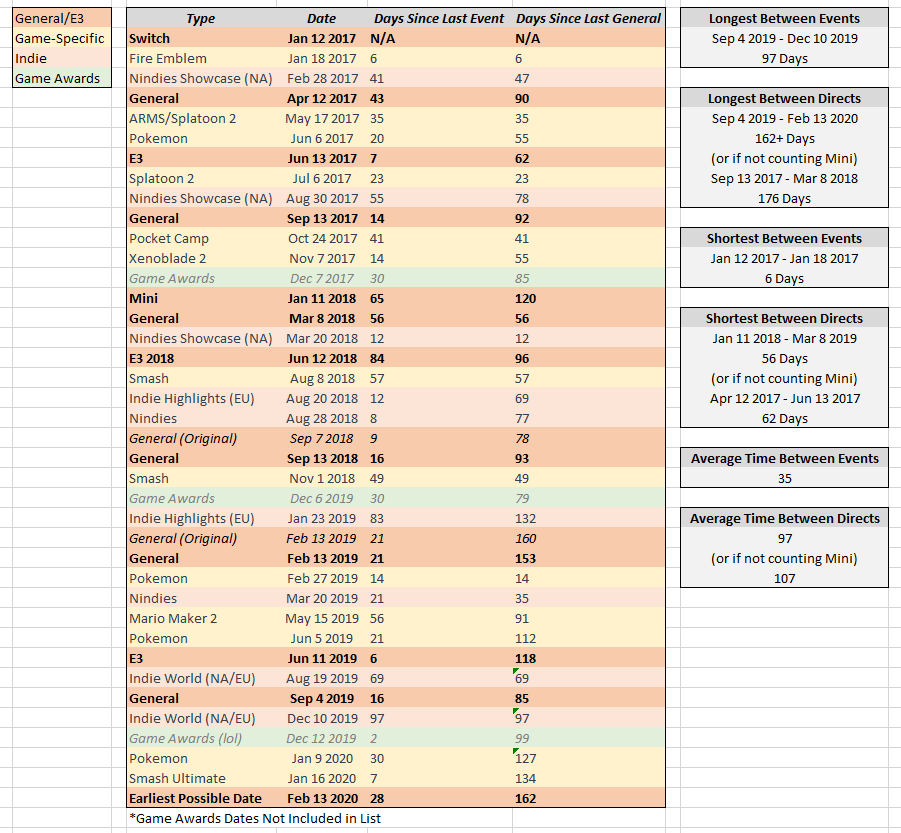 So I basically chose to include every event where something significantly new was announced with the exception of Japanese Indie events (as they're irrelevant to a Western audience) and Game Awards (as they're not made by Nintendo themselves). Events that were simply updates to existing games (e.g. the Terry video for Smash) were excluded.

Thoughts:
- Whilst the time we're in right now represents a below-average wait between events, we are now in the biggest gap by a fair amount between a form of Direct that announces multiple new projects. We're not in the biggest gap if you don't count the Mini Direct but we are if you do.
- The wait between the last Direct of the year and the first Direct of the next year is always the longest, and that wait seems to be getting longer

Nintendo First Party Thread – similar to this thread in that upcoming games are talked about and speculated on, but it's a bit more of a nuanced discussion about Nintendo’s internal teams and their history, the structure of the company, and the ebb and flow of employee numbers in order to predict what may be being worked on. Not the spot for shitposts, hype posts, direct countdowns or to entertain every fake 4chan leak though.

Switch Rumor Archive – this has a pretty good catalog of rumors that we’ve discussed. I don’t think if it will continue to be updated, but it can give you a good background on previous rumors that still may be discussed today.

Nintendo of America Twitter - any Direct announcement will be made here first, usually at 9 or 10 AM ET. Follow and turn on notifications if you wanna know ASAP!

Nintendo Direct Speculation |OT4| The Sequel to OT3 is Now in Development.

And finally, although this wasn’t official, I can’t help but to link the thread that started it all and established the characteristic craziness that NintendoERA still has today during Direct season.

All of us when traditional Paper Mario gets announced

We're in the final stretch now.

Era is cannabilizing it's own sales when OT4 was still going strong, smh.

Your efforts are appreciated but are probably going to be in vain.

Looking forward to OT7 by the end of the week.

The pristine condition of a new thread, soon to be destroyed fast.

OT6 before the Direct hits?

Pre-Valentine's would be sweet

Looking forward to the Direct next week. Yeah I said it.

Let's play a game. You can pick one B-tier Nintendo franchise not already rumored (so no Paper Mario or Metroid) to get announced this next Direct to buff the lineup for October. Which would get you the most excited?

B-tier is defined as not a consistent sales juggernaut. My pick is either Star Fox or Wave Race. Either of those announcements would make me crazy.

First post nails but just incase, I vote to threadmark this!

This is the way.

The hype is so strong we got to a 5th OT in less time than the DB general has been stuck in ite 5th OT despite being one of the strongest communities in its peak. Damn shame.

The next "Direct" is a video published on their Youtube channel bowing out of the video game business, because as others have eloquently put, they are, in fact, doomed. Their final release is a Superman 64 Remastered. Switch exclusive.

Depends when it hits.

Nintendo was my first Love.. please give us a pre-Valentine Gift

This thread will bless us with an incredible Direct that fulfills at least some of our dreams.

No Mother 3 in English, though.

skittzo0413 said:
Depends when it hits.

I think ERA melts before we get to that point

With Sakurai set to talk about the second season of the Fighter Pass in his next column in two weeks, does anyone think we'll get a direct then?

?oe?oe said:
The next "Direct" is a video published on their Youtube channel bowing out of the video game business, because as others have eloquently put, they are, in fact, doomed. Their final release is a Superman 64 Remastered. Switch exclusive.
Click to expand...
Click to shrink...

What if instead they announce they've bought Japan.
But this time for real.

Prepare to be disappointed.

why did Nintendo introduce the direct mini concept then never don't agian?

I went to #TeamE3 this time so I can't be hurt.

BZL8 said:
With Sakurai set to talk about the second season of the Fighter Pass in his next column in two weeks, does anyone think we'll get a direct then?
Click to expand...
Click to shrink...

He might just talk about when and why they decided to do a second season and if or how the selection process differs from season.

I just need Nintendo to confirm the situation with the save data transfer.

louisacommie said:
why did Nintendo introduce the direct mini concept then never don't agian?
Click to expand...
Click to shrink...

I think they did it twice?

BZL8 said:
With Sakurai set to talk about the second season of the Fighter Pass in his next column in two weeks, does anyone think we'll get a direct then?
Click to expand...
Click to shrink...

Guys... i was wondering, did we always had an Insider or a leak hinting something before a Direct? Or when began this trend?

Let's see how this goes.

Lintend said:
Guys... i was wondering, did we always had an Insider or a leak before a Direct?
Click to expand...
Click to shrink...

ZIPPO! FAMOUS NINTENDO LEAKER ZIPPO! CAN I GET YOUR AUTOGRAPH?!