Nintendo Direct Speculation |OT6| OT7 Has Been Rated in Korea

​
Because we apparently can't help ourselves, welcome to another new Nintendo Direct Speculation Thread, the second within 2 weeks. I'm honored to become part of the proud tradition of OPs for these threads, nominated by none other than Phendrift. I've been around since the creation of Era and I witnessed firsthand the birth of the madness that comes with predicting Nintendo Directs, which you can check out here: January 2018 insanity

Somehow that thread got us through 641 pages (and at least 5 title changes) but that's no longer enough to satisfy our voracious appetites for rumors, speculation and maybe if there's a little time left, video games. So welcome to OT6.

(Also shoutout to MondoMega for the awesome banners! And shoutout to Ecliptor for the excellent title suggestion. And thank you to the previous OPs of these threads for compiling most of the below info.)

Of course, let’s get through the formalities of what this thread is. It's kind of a unique beast on ResetERA, and NintendoERA members early in the site's lifetime worked long and hard to get a reliable and official safe haven like this where we can run rampant with speculation. That said, there are some rules, moral and behavioral standards, and general guidelines that are needed for this thread to be the best and most fun place it can be. So, without further ado, here are some important documents from people who can all say it better than I can....

The Official permission grant from Nibel establishing the thread’s purpose:

One point I'd like to address: while there will be ultimately some kind of overlap between 1st party discussions and Direct discussions, I imagine the Direct thread would be more focused on speculation, possible leaks and rumors than this one. It would basically be a thread to contain "all the madness" in one place to keep this thread more level-headed and on-topic.

We've discussed to have a dedicated thread after Moon's suggestion yesterday and came to the conclusion that this might work for the best going forward. So: if anybody is interested to make that thread, they are officially allowed to do so.

The founding Charter from the first OP Kevin360 :

The purpose of this thread:

To better contain the madness of ResetERA's Nintendo Direct speculation, and keep it relatively separate from the Nintendo First-Party thread.

As a general rule, let's try to avoid too much "reset the clock" type posts, until of course, we have a really good reason to think it's time to actually be resetting the clock. Madness must have some modicum of reasoning, you know?

ALSO: DO NOT MESSAGE/HARASS AND TAG 'INSIDERS' (this should go without saying, but they've alluded these things crossing the line)
Click to expand...
Click to shrink...

A wise approach by Furtive Pygmy on how to treat insiders and inside information (now with spellcheck!):

This is my approach:
1) Don't blindly trust in anything insiders say. Take it as information of yet to be confirmed validity and a basis for further speculation, nothing more.
2) If it doesn't pan out, deal with it. It doesn't affect you in any way, either way.
3) If it does pan out, great. It's not like that means they should be put on a pedestal.
4) Don't insult or harass them. Just move on and draw your own conclusions on whether or not you still want to listen to what they have to say.
Just my 0.02$.
Click to expand...
Click to shrink...

Seriously, please don't insult or harass anyone at all. Let's all be cool and get along.

Keep all of these in mind so that we can keep these threads going. Can't imagine how dark of a future NintendoERA would have without them...

This will be where I update the OP with new information that presents itself. I won't bother with ridiculous 4chan rumors or random things from Twitter but solid rumors from trustworthy insiders, well-detailed speculation and official announcements will go here.

- Animal Crossing Direct on 2/20/2020 at 9am EST, as the signs foretold. Announcement thread here: https://www.resetera.com/threads/animal-crossing-new-horizons-direct-feb-20-9am-et.170757/

CONFIRMED GAMES IN GENERAL
They’re coming, but when…?

Pikmin 3 - Wii U port delayed to add new single player content
Super Mario 3D World - Wii U port
Metroid Prime Trilogy HD – some fuckery is going on, perhaps due to the delay of Prime 4. Consensus seems to be that it’s still coming though.
2D Metroid –reports seem to be conflicted on if it’s a remake or a brand-new game
Paper Mario - hinted at by insiders, reason to be "hopeful" (return to form? Remaster of first two?)
Halo – coming to the switch in some form. What game though? Hasn’t been said.
The World Ends With You 2 - should be coming this year, and not only to Switch
Catherine: Full Body- rated for Switch in Korea
XCOM 2- rated for Switch in Korea
Click to expand...
Click to shrink...

Super Mario Odyssey 2 – following a Galaxy 2 pattern, likely to be an iterative sequel coming soon
Super Mario Party 2 – Mario Party usually gets put out quickly, 2 years since the first
Kirby - series is usually pretty frequent, and was absent last year with the exception of an F2P game. Star Allies was early 2018. We should get a new mainline entry or experimental spinoff this year
Splatoon Spinoff – the time is ripe for one with Splatoon 3 not coming soon, and that cryptic SOS image….
Mario Golf – probably what Camelot has been up to since Mario Tennis Aces
The Legend of Zelda: The Wind Waker HD - This would depend on when BotW2 is coming. If it's delayed past 2020, this could take it's spot
The Legend of Zelda: Twilight Princess HD - Same as above. Nintendo wants a Zelda every year, we think. If no BotW2, a port is likely.
Game from the Mario Kart team - their last game was ARMS in Summer 2017. Their next project should be at least showable. As for what it is, who knows?
Click to expand...
Click to shrink...

UNLIKELY GAMES AT THE MOMENT
You'll have to wait a little longer...

Xenoblade Chronicles X - Wii U port. With Xenoblade DE coming, they likely don't want to oversaturate
Pokemon Diamond and Pearl Remakes - The DLC for SwSh probably rules out any retail main series Pokemon release this year
Splatoon 3 - It's been said by the developers that it's not in development. A big part of this is because they have been working on Animal Crossing.
Donkey Kong Country - Retro is busy on Prime 4, and Tropical Freeze was likely ported to hold the series over
Click to expand...
Click to shrink...

Thanks to Plum for this. 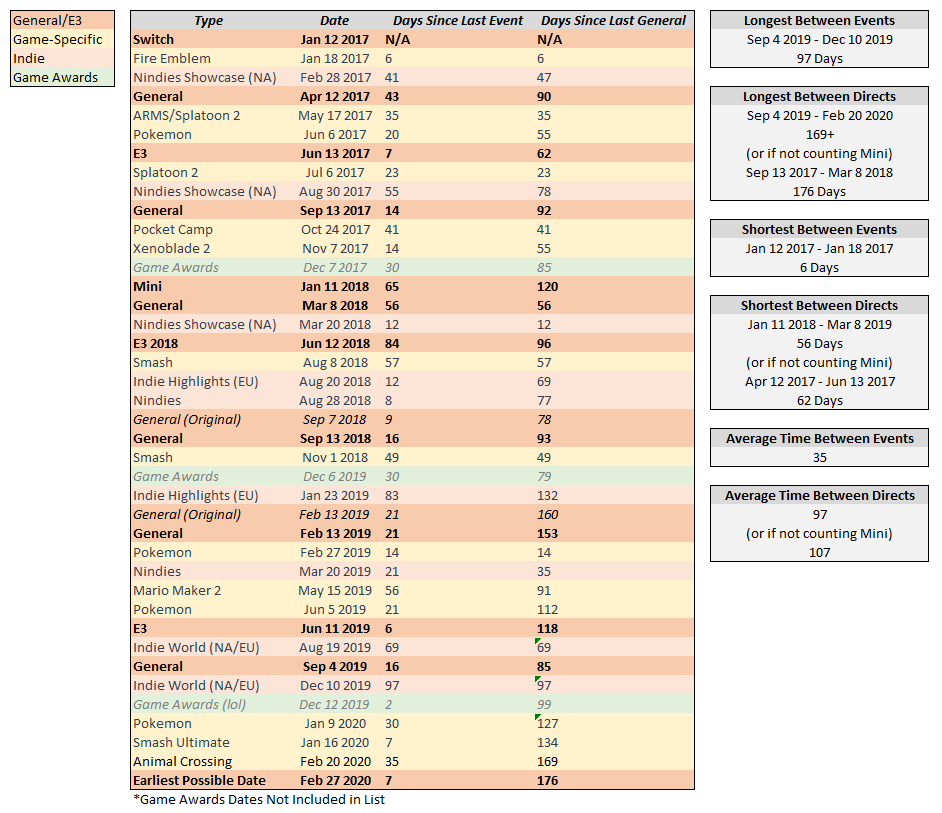 So I basically chose to include every event where something significantly new was announced with the exception of Japanese Indie events (as they're irrelevant to a Western audience) and Game Awards (as they're not made by Nintendo themselves). Events that were simply updates to existing games (e.g. the Terry video for Smash) were excluded.

If the Venture Beat rumor above is correct, the wait will have been 204 days.

Nintendo First Party Thread – similar to this thread in that upcoming games are talked about and speculated on, but it's a bit more of a nuanced discussion about Nintendo’s internal teams and their history, the structure of the company, and the ebb and flow of employee numbers in order to predict what may be being worked on. Not the spot for shitposts, hype posts, direct countdowns or to entertain every fake 4chan leak though.

Switch Rumor Archive – this has a pretty good catalog of rumors that we’ve discussed. I don’t think if it will continue to be updated, but it can give you a good background on previous rumors that still may be discussed today.

Nintendo of America Twitter - any Direct announcement will be made here first, usually at 9 or 10 AM ET. Follow and turn on notifications if you wanna know ASAP!

Nintendo Direct Speculation |OT4| The Sequel to OT3 is Now in Development.

Direct is imminent.
I FEEL IT IN MY BONES
Nice Chibi Robo Gif btw skittz

I can;t wait for a direct to not be announced tomorrow.

THIS IS THE THREAD RIGHT EVERYONE

So much Direct thirst.

The One Who Knocks

I'm excited for Persona 5 on Switch

This is the thread, for real this time.

Let me start off this thread by saying Atlus are clowns

I can't actually be near the top of Who Replied for a bit, yay!

TOMORROW IS THE DAY

I can't actually believe this.

I'll have to ignore another thread for the sake of my productivity :)

No Directs on February either.

Reminder: don't make bets that involve drinking your own urine. And even if you do, nobody is expecting you to follow through on them.

OT6... I have good feelings. This will be the OT of the direct! Fooooor sureeeee

Good job on the OT though.

It’s here! All hail OT6! I’ve got a good feeling on this one.

Would it be too much to ask that y'all behave a bit better in this one, compared to the last one~?

Also. DQ11 is amazing. Just what I needed for that jrpg itch I had.

I feel we’ve finally turned a new leaf with this thread.

if a direct doesn't happen while we're in this thread i'm gonna drink my own fucking spinal fluid!

This is exhausting. Aren't you all tired? I'm tired.

The longer we wait, the better direct will be. Right?

TheGreatMightyPoo said:
I feel we’ve finally turned a new leaf with this thread.
Click to expand...
Click to shrink...

What about a new horizon?

If we don´t have a Direct this week I will be mad enough to drink water.

TheGreatMightyPoo said:
I feel we’ve finally turned a new leaf with this thread.
Click to expand...
Click to shrink...

I sense an Animal Crossing reference.... okay not really but I sense a Direct on this New Horizon

I am loving that Chibi Robo gif, it's fantastic!

Is this the fastest we’ve gone through a speculation thread?

That OT title is amazing

Theoretically how long would we keep creating OTs if the direct never came?

Denman said:
The longer we wait, the better direct will be. Right?
Click to expand...
Click to shrink...

It‘ll be a third party reel lasting 2 minutes and the “one more thing” will be a port of Warioware Gold.

TreIII said:
Would it be too much to ask that y'all behave a bit better in this one, compared to the last one~?

That seems like a lot to ask honestly. These threads are pure madness.
Threadmarks