Buckle up folks, this is a crazy story.


Umdlye said:
FYI: All outward facing Jagex staff are referred to as 'moderators', whether or not their job involves moderation duties. The employee in question was a content developer who joined the company in 2015.
Click to expand...
Click to shrink...

We confirm that a Member of The Old School Team was dismissed from employment at Jagex following gross misuse of moderator privileges.

During our rigorous routine system checks, irregular activity was identified on small number of accounts, including the movement of wealth and items back into the live game.

Following our investigation, we were able to resolve the issue before any significant impact was made to the wider game, or economy. We have also taken steps to return items and GP to any affected accounts. Whilst we generally do not return items or gold, we feel that given this unusual situation, we wanted to ensure no players lost out to the rogue actions of a member of staff.

We are actively working with the Police regarding the incident, but given this an ongoing legal matter we are unable to provide further details.

We pride ourselves on the passion and integrity of the JMods that work for Jagex and we hold them to the highest standards. However, we are not afraid to take tough action and make difficult decisions if someone cannot meet those standards.

We will dust ourselves off, and move on. Old School is at its biggest and strongest since launch, but we still have much to do, not least a mobile launch which each day gets closer.

As always, thank you for your support.

One of the more prominent victims of this was a RuneScape player who posted this on Reddit two months ago: https://www.reddit.com/r/2007scape/comments/8y89cb/no_one_wants_to_hear_it_but_there_is_a_serious/

Regarding the incident, a Jagex employee replied at the time saying that:

TLDR is that the hijacker had a host of strong info (enough to say that they were the original owner of the account...), and that was the basis of them gaining control of the account.
Click to expand...
Click to shrink...

We did say in the inbox message they had credit card info and transaction IDs, I'm afraid, as well as a great deal of other information. It does look like you've had a serious amount of information compromised.
Click to expand...
Click to shrink...

Today, that user received all his stole gold back (45 B) back: https://www.reddit.com/r/2007scape/comments/9hflp3/so_i_am_the_person_who_got_hacked_for_45b/e6bgges/ 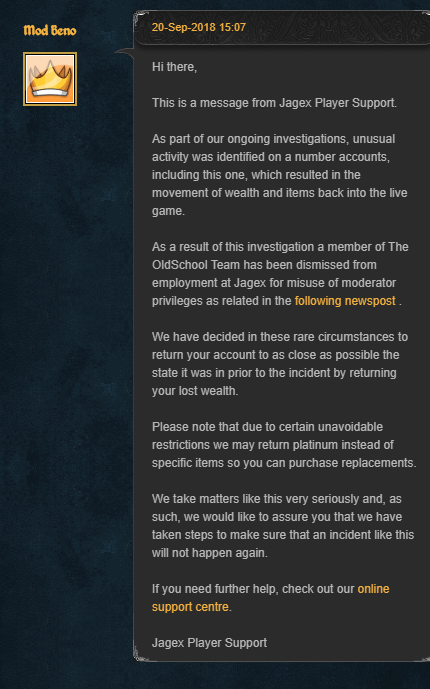 This means that the Jagex employee, who appears to have been a junior level moderator, not only stole gold from accounts, but they had access to security questions, passwords, payment/transaction info, credit card info, and more. But, it doesn't stop there.

The mod in question was affiliated with a controversial ingame clan. This clan is known for both doxxing and ddosing (there was a PVP bracket tournament where one of their members advanced six times in a row because of disconnecting opponents). This even happened to people playing on unknown fresh accounts on fresh public library IP's (so should be unknown). Leaks from their private forums included a disgusting amount of doxxes of well known community members.

There coincidentally was a big tournament this weekend. Every single tournament so far has had tens to hundreds of people disconnect, especially in the later stages of the final when they faced related clan members. The mod in question had been suspended by then and there suddenly were no disconnections - unheard of before. The prizes of these tournaments have been in the 10k to 20k usd range, and the clan associated with this moderator won multiple times because of insider information and ddoses made possible by employee.
Click to expand...
Click to shrink...

This piece of information is not confirmed yet, beyond the fact that the moderator was associated with this clan called RoT. However, there are now mass petitions on the 2007scape (Old School Runescape) subreddit for RoT's wins and statues in game to be struck from the record and for the clan to be banned from any future tournaments.

Additionally, this same moderator who was recently found stealing was investigated and cleared by Jagex 9 months ago for the accusations made against the clan's insider info/ddosing and Mod Jed's accused involvement. Obviously, though, given the information revealed today, there is a lot of suspicion being cast towards this. Additionally, what isn't known is whether or not the known theft was occurring during the investigation by Jagex into his alleged actions to assist the clan or after.

TL;DR: Junior Moderator from Jagex steals gold. In total, the amount of gold stolen so far based on the amounts posted by users totals up to well over 100 B, which, through real-world trading (RWT), translates into over 100K USD. He also appears to have had access to users' security questions, passwords, and most importantly their payment information. If the allegations about the clan information are true as well, then there has been an additional several instances of 10k-20k USD being stolen via DDOSing and insider information.
Last edited: Sep 20, 2018

... I am both shocked that people still play runescape and that there are runescape tournaments.

I love these MMO stories good or bad.

Definetly the real story is that there is more than 100k in Runscapes economy.

FYI: All outward facing Jagex staff are referred to as 'moderators', whether or not their job involves moderation duties. The employee in question was a content developer who joined the company in 2015.

Why on earth did he have access to user information and more importantly to payment information as a junior mod? Common sense says you don't give that data out unless absolutely necessary.

Edit: The above post answers my question
OP
OP

Umdlye said:
FYI: All outward facing Jagex staff are referred to as 'moderators', whether or not their job involves moderation duties. The employee in question was a content developer who joined the company in 2015.
Click to expand...
Click to shrink...

Thanks, I added that to the OP and updated the thread title

I see you've never heard of Old School Runescape? It usually has around 70k people playing at once every day (currently says 69k on the website) but It's a lot more popular than the main game (RuneScape 3).

The recent tournament had more than 50k viewers on Twitch. It's not a lot for a big tournament when compared to other games on Twitch, but for a game as old as this, that's really good.

If they're anything like me, they're playing it for the nostalgia, Old School Runescape is still pretty fun and I see that it still gets a lot of traffic.

Oldschool runescape has a decent active community and streamers. The modern runescape "runescape 3" is basically dying as the days go by.

not shocked one bit, not surprising scamming is inherent to runescape

zswordsman said:
If they're anything like me, they're playing it for the nostalgia, Old School Runescape is still pretty fun and I see that it still gets a lot of traffic.
Click to expand...
Click to shrink...

It's also releasing on iOS and Android on October 30th which is so crazy. I wonder how many new people will start playing the game who have never even heard of RuneScape before.
You must log in or register to reply here.
Share:
Facebook Twitter Reddit Pinterest Tumblr WhatsApp Email Link