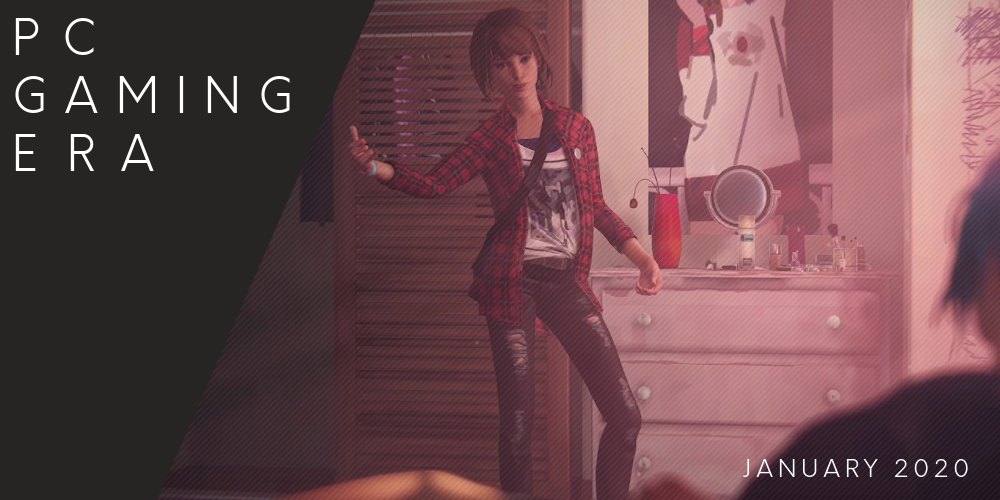 Coffee Talk, from Toge Productions, is a narrative driven bartending game. Set in an alternative Seattle, where orcs and elves roam the streets doing their mundane jobs alongside humans, you play as a barista in the eponymously named shop, you'll listen to their stories, mix drinks and change lives. All with a lo-fi jazzy musical accompaniment and relaxing aesthetic, pleasing to the eye and heart. Just look at it!

So, yes, this is very much in the VA-11 Hall-A: Cyberpunk Bartender Action groove, but from the demo at least it's slightly less comedic. Now I loved VA-11 Hall-A, and something like this, with the repetition of mixing drinks and changing lives, along with some soothing music and visuals, feels just right for January. A nice, relaxing way to start the year. I was slightly disappointed by the rather simple story I saw in the demo, but that's probably just the starting point, and the writing was good, so I'm not too worried there.

Blade Runner - Uzzy
Early in the 21st Century, THE TYRELL CORPORATION advanced Robot evolution into the NEXUS phase - a being virtually identical to a human - known as a Replicant. The NEXUS 6 Replicants were superior in strength and agility, and at least equal in intelligence, to the genetic engineers who created them. Replicants were used Off-world as slave labor, in the hazardous exploration and colonization of other planets. After a bloody mutiny by a NEXUS 6 combat team in an Off-world colony, Replicants were declared illegal on earth - under penalty of death. Special police squads - BLADE RUNNER UNITS - had orders to shoot to kill, upon detection, any trespassing Replicant.

This was not called execution. It was called retirement.

One of Westwood Studios' finest works, and quite a departure from the RTS fare the studio was more famous for, Blade Runner is one of the most atmospheric point and click adventure games ever made. This time it's actually available, with GOG putting out a release just last month. You play as Ray McCoy, a rookie Blade Runner assigned to investigate a case of multiple animal murder. No person would murder one of the few remaining animals, so of course, Replicants are suspected in the crime. The game features a branching original storyline that can end in one of thirteen different ways, a side story set in the same time and place as the iconic and movie, cameos from some of the movie's characters (no Pris and her bangs, sorry Chloe) and the legendary Frank Klepacki scoring the game, based on Vangelis' work. You can currently play it on 64 bit PC's by installing it with this tool, and running it through ScummVM.

People who retired the right replicants: -

Apparently The Witcher 3 is experiencing quite the resurgence of late. Why not prove you're as good as Henry Cavill up there and complete all the Witcher contracts in game?

People who earned the 'Geralt: The Professional - Complete all Witcher contracts' achievement: -

The SteamERA Community was founded on Discord on October 2017, a stranded bunch of SteamGAF who united together and embraced on what we thought was the end of times. However as more people joined we found hope and soon started to formulate and plan for the future. This thread would not be possible without the community we have on Discord and I encourage all of you to join if you have not.

You can join this amazing community on Discord with this link:
Hidden content
You need to reply to this thread in order to see this content.
Last edited: Jan 2, 2020
OP
OP

It's that time again, and this time it's including the Game of the Decade poll.

Read the Rules first, and send Uzzy a PM for the Google Forms link

The categories for voting are:
GOTY Award:
GOTD Award:
Ongoing, Early Access, VR and Turd of the Year are all optional, one choice each.

Eligibility:
To prevent a recurrence of last years mix up, please copy the title of the game you wish to vote for from Steam (or other platform if only available there) precisely, including trademark notices. (I.e. if you want to vote for RE7, put 'RESIDENT EVIL 7 biohazard / BIOHAZARD 7 resident evil' into the voting form. If you want to vote for Witcher 3, put 'The Witcher® 3: Wild Hunt' as that's what it comes under on Steam.) I will be parsing the votes to try to get everything counted, but this sort of consistency will help.

What about the Power of Friendship? ;P

Reminder of the finest line in video games last decade.

Put disgusted Cavill on the cover you coward Uzzy

(Great work as usual, Uzzy. Thanks

May we continue to be blessed with many more in the new year.
Last edited: Jan 1, 2020

Happy 2020!
Now where is our flying cars and holograms and shit ?

I actually started my Witcher 2 playthrough a couple of days ago. Hopefully won't take the approximately 7 years to complete like the first game.

New year, here I come! Time to complete look at my growing backlog!

We are at the beginning of the Epic Games decade, folks. It was nice knowing you, Steam, but where we're going, we don't need shopping carts.

Man, so just a few days ago I got my PC, after being pretty much exclusively consoles for about 6-7 years.

I stayed up for like 54 hours playing so much awesome stuff. Slept for 10 hours and I'm already close to another 24 awake. So many amazing games, I legitimately feel like a kid again with all this excitement!

I'm so happy to be back on PC.

Heh, just realized I ended the decade and began the new decade on a really fantastic note!

Baron von Loathsome said:
We are at the beginning of the Epic Games decade, folks. It was nice knowing you, Steam, but where we're going, we don't need shopping carts.
Click to expand...
Click to shrink...

Have you not read about shopping cart deaths? Those are way too dangerous for mere mortals.
That's why Epic locked carts in dark basement.

Xbox is gonna kill Stadia before end of this decade.

Happy new year everyone! Would be fun to complete either the challenge or retro of this month. Will see how I progress with RDR2 and Tetris Effect.

Baby, Pink is my favourite part

Took a good bit to re-arrange everything, but now i'm pretty happy with it and will leave it alone for a few more years lol.
Click to expand...
Click to shrink...

Looking noice indeed! Recently did mine to look aesthetic as hell, pretty happy with how it turned out.

wish they could update the UI elements in the profiles, they feel ancient

Baron von Loathsome said:
We are at the beginning of the Epic Games decade, folks. It was nice knowing you, Steam, but where we're going, we don't need shopping carts.
Click to expand...
Click to shrink...

At least we got Street Hoop legally on Steam.
For $5ish.

Only a few days until Monster Hunter Iceborne

Finished my GoG winter sale haul today. (What turned into quite a hassle, cause my spendit card's region lock is now in full swing and even blocks Paypal completely now, but different story.)
First I added Lorelai to the cart. Then Downfall Redux. Never Alone was last. Now they turn up in my libary in this order: Lorelai, Downfall Original, Never Alone, Downfall Redux.
Wtf GoG, why separate the two Downfalls?! That looks awful!
I hate this year already. -.-'

Happy Decade Era, we're in for an amazing year!

Happy New Year everyone, purchased my first game of 2020 Hades!
This year I shall only purchase great games and 0 bundles!

We leave a decade without Half-Life and enter one with Half-Life.

It just occurred to me that Assassin's Creed 2 would be eligible for PC GOTD. That game feels ancient but still so damn good.

Uzzy hijacked the thread with lis?

I need victoria 2 collection to go for $10 @[email protected]

I have the following in my Steam cart:

Baba is You
Dicey Dungeons
Kind Words
Slay the Spire

Comes to about £22.50 with some Steam/PayPal credit I have.

These will all run on my ancient laptop, right? Only one I'm not sure about is StS...

Dangerblade said:
I have the following in my Steam cart:

Baba is You
Dicey Dungeons
Kind Words
Slay the Spire

Comes to about £22.50 with some Steam/PayPal credit I have.

These will all run on my ancient laptop, right? Only one I'm not sure about is StS...
Click to expand...
Click to shrink...

Speaking from personal experience, aside from the Kind Words which I don't know, pretty much yeah lol

Trying out Little Nightmares, and getting a little dizzy with the boat motion. Lol I'm such a lightweight.

Uzzy said:
It just occurred to me that Assassin's Creed 2 would be eligible for PC GOTD. That game feels ancient but still so damn good.
Click to expand...
Click to shrink...

On PC exclusives or good games, thanks.

Ok it is 2020 so where are new cards Nvidia?!Amazing games are coming and i am stuck with 1060 XD