Has it been a year? It feels like forever and yet it also feels like no time at all! Yes, it was on October 25th, 2017 that ResetEra first opened its doors to the public.

This feels like the perfect occasion for a newsletter to catch up on the past and future, and we'd like to open it by thanking everyone for being a part of this journey. From the moderators to the tech team to the community itself, from the members who were with us at launch to the newcomers bringing in fresh blood, you are all magnificent and we love you for it. In many ways it feels like we've compressed a decade of growing pains into a single year.

In the end what's really important is not the end of our first year, but the limitless potential of years to come.

There have been a few significant developments in this area since our last update. First of all we're sad to report that after the longest tenure yet as a mod captain, Selina has decided to step back from that role for personal reasons. She leaves behind shoes that are too big for any one individual to fill.

Stepping up to assume the weighty responsibilities of Administrators and Mod Captains are B-Dubs and Mist. You may have already seen them around in their new roles! These new Captains join the veteran Hecht to form a triumvirate. We have every confidence that the team will continue to be expertly guided by their leadership. If you have any questions about moderation please don't hesitate to reach out.

There are also a couple of new moderators who have come aboard since our last update. You may or may not have already noticed them, but we are today pleased to officially introduce:

This pair has already been putting in some impressive work and we're looking forward to more great contributions from them in the future. As a reminder, you can always find a complete and updated staff roster here.

As we've mentioned in the past, we've been putting our heads down, rolling our sleeves up, and pouring resources into a major site redesign worthy of being called 2.0. This effort will incorporate the lessons we've learned and feedback we've collected over the past year. It will contain many of your most hotly requested features, as well as some very cool ones that you might not have thought of. No expense is being spared on this project.

The time is fast approaching when we'll be able to pull back the curtains fully. We can't wait to share more. We hope you'll love it as much as we do.

One year ago today, Night_Knight started a thread titled "We in bois!" It was ResetEra's first celebration thread. If you have the time, spend a few minutes and browse through it. The excitement and energy on display are really something special, and that same energy continues to sustain the community today.

Thanks to Night_Knight for kicking off the celebrations, and thank you to everyone for inaugurating ResetEra in style.

It was Ghost who in December first asked the most important question in gaming: Who is Hideo Kojima's BFF?! The ensuing investigation resulted in a truly monumental thread, one we'd be remiss not to mention. Full of hilarious images and posts and plenty of Hideo Kojima, it shows what happens when ResetEra conducts a "serious" investigation. 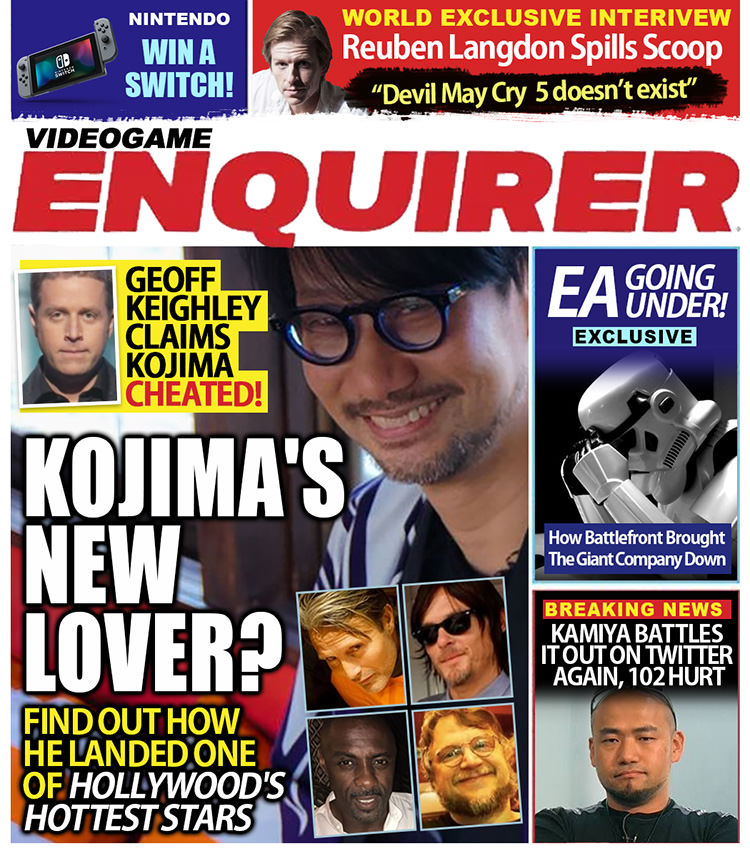 Thanks to SunhiLegend for the video, Zimmiwood for the Video Game Enquirer image, Ghost for starting it all, and everyone else in the community who helped take part in this truly important journalistic endeavor.

A Life Threatening Illness, A Community, and A Dream

What began as a sad thread about Talal being told by doctors that he had only weeks to live transformed into one of the most extraordinary examples of the ResetEra community banding together. With the life of a fellow member on the line, the community remarkably raised the funds to cover the entire cost of his treatment. As a result, long beyond eights week later, Talal is still alive today with his illness is in remission.

Thank you Talal for being brave enough to share such emotional news with the community, for fighting through treatment, and for keeping us in your thoughts every step of the way. Thank you to every member of the community who donated to help Talal or offered well wishes. And thank you to BobLoblaw who went above and beyond to help Talal receive his funds and start his treatment on time. Congratulations again on the remission Talal!

The Sega Dreamcast and ResetEra

In January, Krejlooc alerted the community to a serious problem: he was unable to access ResetEra from his Sega Dreamcast. Reminiscing over the Dreamcast, pornographic parties, and more, this thread was a surreal and wild ride from start to finish. If you want a real trip down memory lane, this is the thread for you.

Thanks to Krejlooc for raising the issue, and to those who helped try to solve this urgent problem.

In September Buttzerker posted a thread about a baby rodent he had found in a gas station parking lot and had decided to raise on his own. The baby was dubbed Powerhouse, and the pair quickly won the adoration of the community as we all waited breathlessly for each update on its struggle for survival. A livestream was even set up so that no one would have to miss a moment.

The love and care that Buttzerker demonstrated for this most helpless and tiny of creatures was deeply moving to all who followed the thread, and although the story came to a sad end when Powerhouse passed away after a couple of weeks, that enduring act of kindness lives on in our hearts.

Has it been that long already?

Joking aside, thanks for your continued hard work and happy anniversary.

it makes me
laugh

Ah, yes. I remember when I came back after a weekend trip and everything was on fire. Ended up making my way into a discord group (which is odd because I don't even use discord) and another site I forgot the name of (they were pretty welcoming though) before this place opened it's doors/sent out invitations and stuff a few days later.

It's been a really fast year.

nice recap of the year !

when will emoji support launch as per the results of this poll?

Powerhouse lives on in our hearts, and the mouse band.

It's a been a year? Feels like we never left tbh

2.0 is going to be hated no matter what it is. lol

One year... feels like you've been here my whole life, ERA

Congrats everyone involved and thanks for giving us a home.

SweetNicole I understand we as non-prominent members may not think of all the cool features the team has in mind, but I would like to beg in the most respectful but desperate manner possible: Would you please consider soliciting feedback from the community as a whole before the new version rolls out?

I remember in the very first days of Era how one of the coolest things was how open the development team was, and how we even got to vote in a poll about one of the interface decisions. To me, that encapsulates one of the core values Era was founded on.

Thanks for the hard work everyone has put in, and please let me know if any assistance would be appreciated on the development front.
OP
OP

when will emoji support launch as per the results of this poll?
Click to expand...
Click to shrink...

We finna gonna get likes and emojis in 2.0?

Here's to another successful year!

I dig the the virtual scrapbook style highlights. Cool 1 year everyone!

Can’t believe none of my threads were highlighted.

God I remember that january direct like it was yesterday

Oh wow I was not expecting a mention here.


Happy anniversary all, and again thanks for all the love and support while I had Powerhouse.


In light of the occasion, I told Powermouse about his legacy tonight. He didn't seem particularly moved, and went back to licking Run The Jewels' back:

SweetNicole said:
A Life Threatening Illness, A Community, and A Dream
Click to expand...
Click to shrink...

Yup, nothing can beat this.

We made it guys

Long live the memory of Powerhouse!

A good year it has been.

Am here too :D
Happy anniversary:p

I'm curious SweetNicole...and this might be a dumb question...what does a Mod Captain do exactly?

RIP to the homies we lost along the way

To many many more ERA!

I’m going to order a jumbo burrito, to celebrate.

Whatever happened to blame space?

No honorable mention of the January Nintendo Direct Hype Thread? It's a conspiracy! A conspiracy I tell you!

Jokes aside, Era is by far the most positive gaming community I've ever been a part of, for sure because of it's great moderation team. Here's to another year of success! And many more after!

awesome work, can't believe its been a year already. fuck, we old

The homage to the Lethal Weapon 4 credits roll hit me with a blast of nostalgia.

I love the Powerhouse and Talal thread shoutouts.
Among the darker topics cropping up over the past couple of years, these threads were truly inspirational and restored my faith in the human race somewhat :)
You must log in or register to reply here.
Share:
Facebook Twitter Reddit Pinterest Tumblr WhatsApp Email Link