welcome to the fourth (even tough it says OT5) Sony First Party Thread.
Here's to another 400 pages of discussion about the release date of The Last of Us, Death Stranding and Ghost of Tsushima.
Credits to ThisThingIsUseful for the OT Name 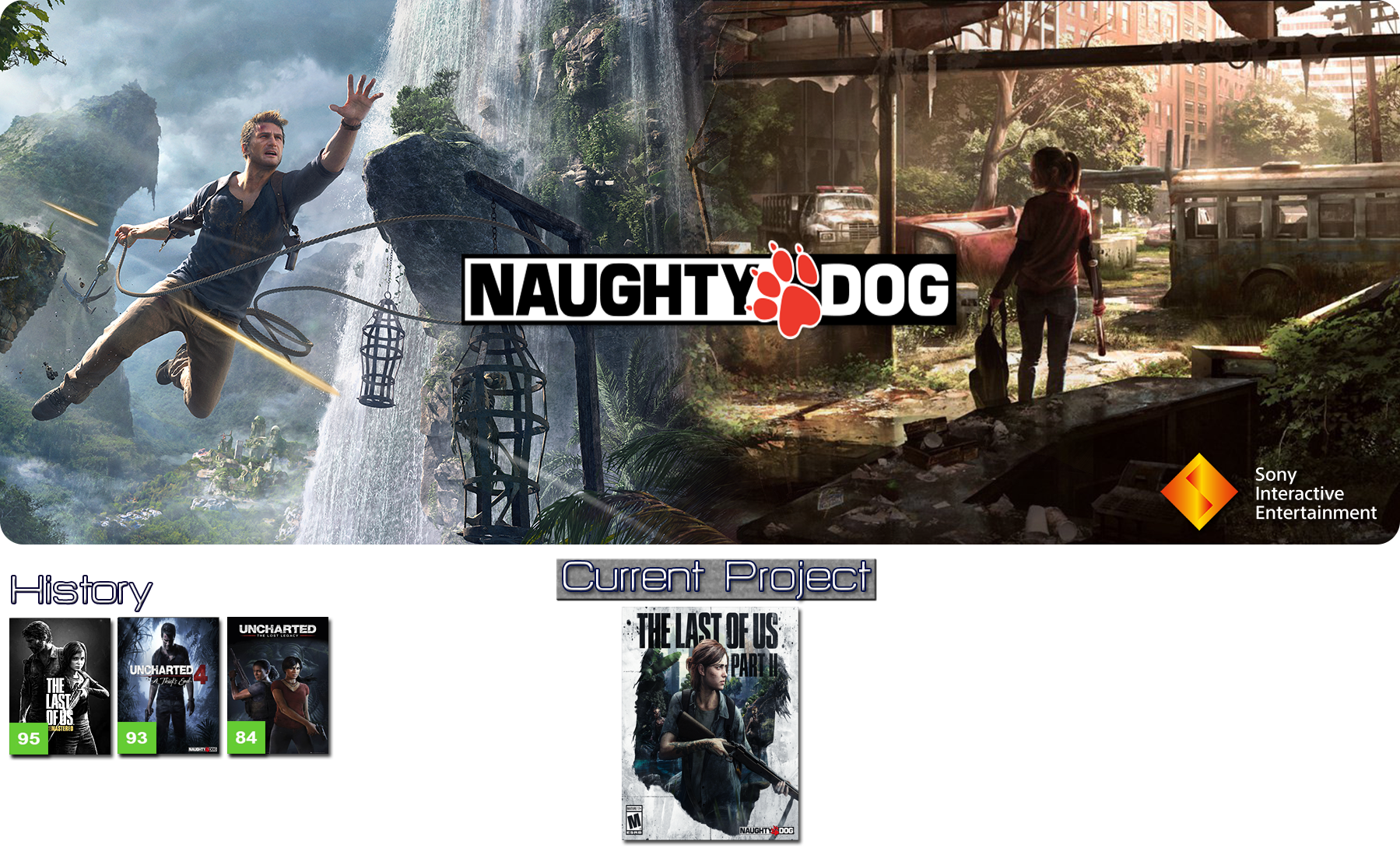 Probably the most famous Studio among SIE, known for constanly delivering high quality blockbuster titles, such as Uncharted or The Last of Us.
The Studio was founded 1984 by Andy Gavin and Jason Rubin as an independent developer, starting their PlayStation Partnership with the iconic Crash Bandicoot title in 1996.
In 2001 they were acquired by Sony Computer Entertainment and in the coming years and generations Naughty Dog became one of the most respected and highly rated Studios in the Gaming Industry.
Naughty Dog is home to the ICE Team, one of Sony's World Wide Studios central technology groups.
The ICE Team focuses on creating core graphics technologies for Sony's worldwide first party published titles, including low level game engine components, graphics processing pipelines, supporting tools, and graphics profiling and debugging tools. 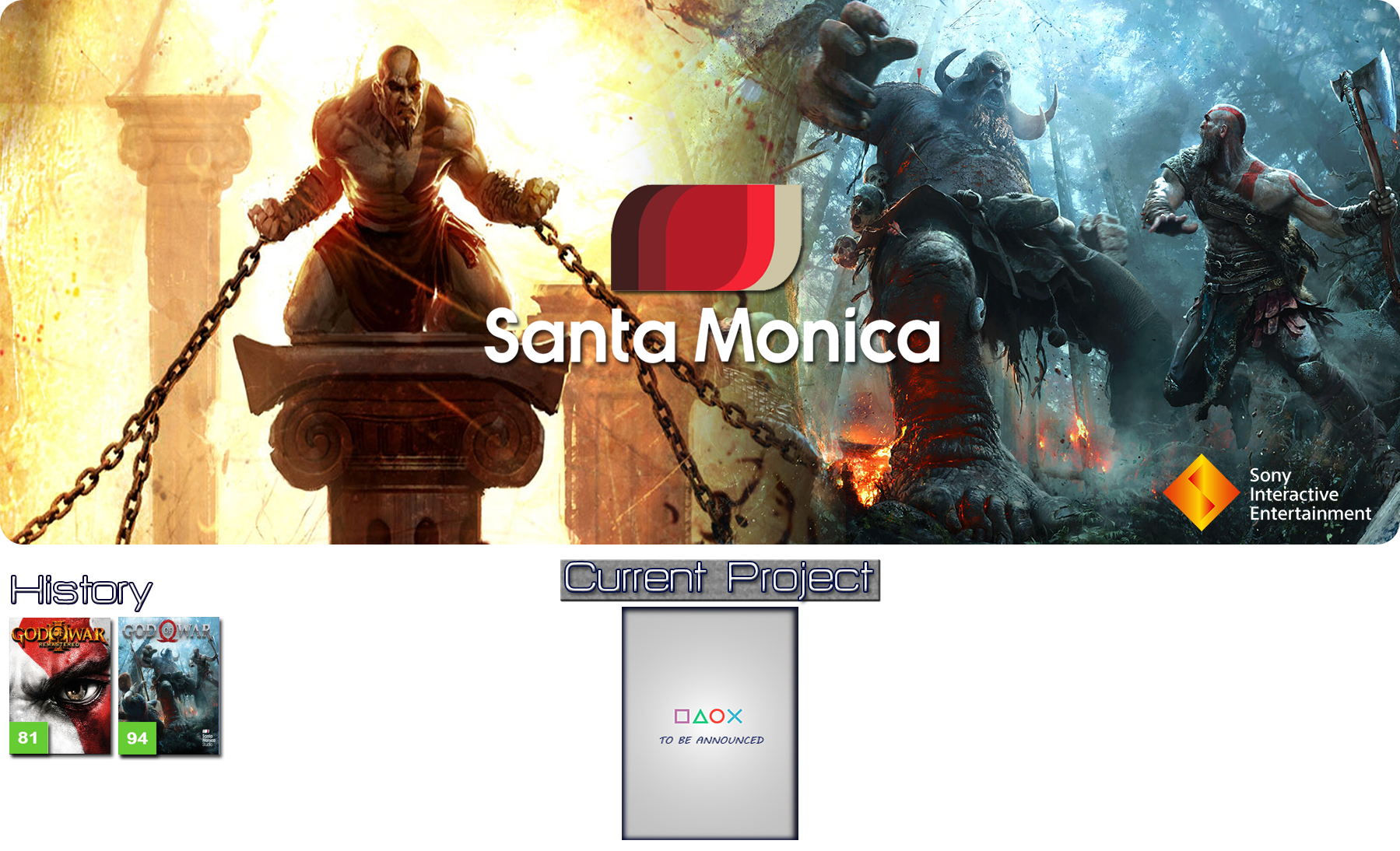 Sony Santa Monica, also known as the God of War Studio, was established in 1999.
While developing the highly acclaimed God of War Games, they were also serving as a support studio for external developers working on First Party Games.
In 2014 the Studio moved from Santa Monica to a new facility in Playa Vista, Los Angeles 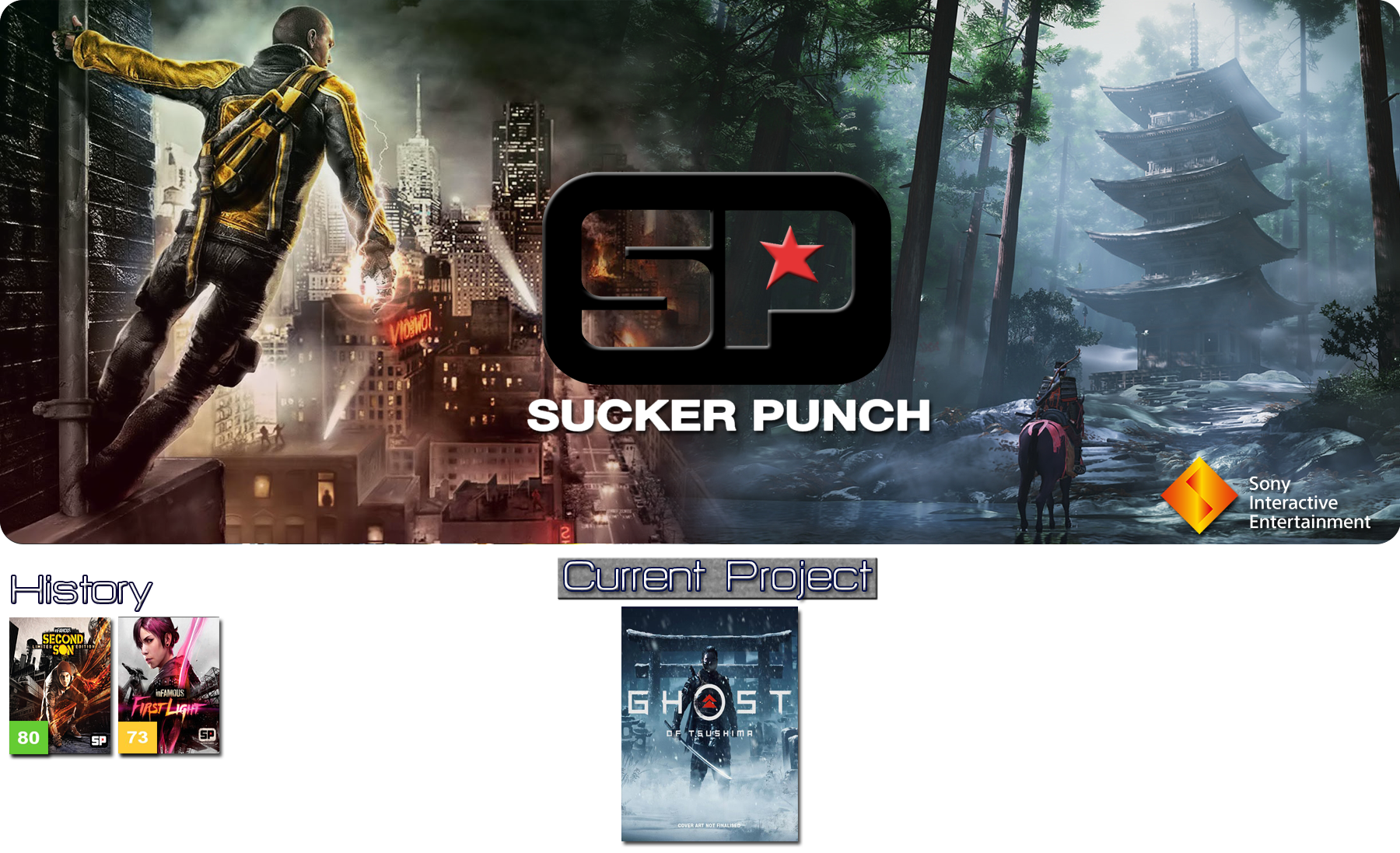 founded in 1997 Sucker Punch was an independent development studio who has worked solely with Sony Interactive Entertainment since 2000. In 2011 they were acquired by Sony Computer Entertainment.
Sucker Punch is best known for the Sly Cooper and inFAMOUS series. In 2018 the Studio moved to a new facility, most likely due their team expansion. 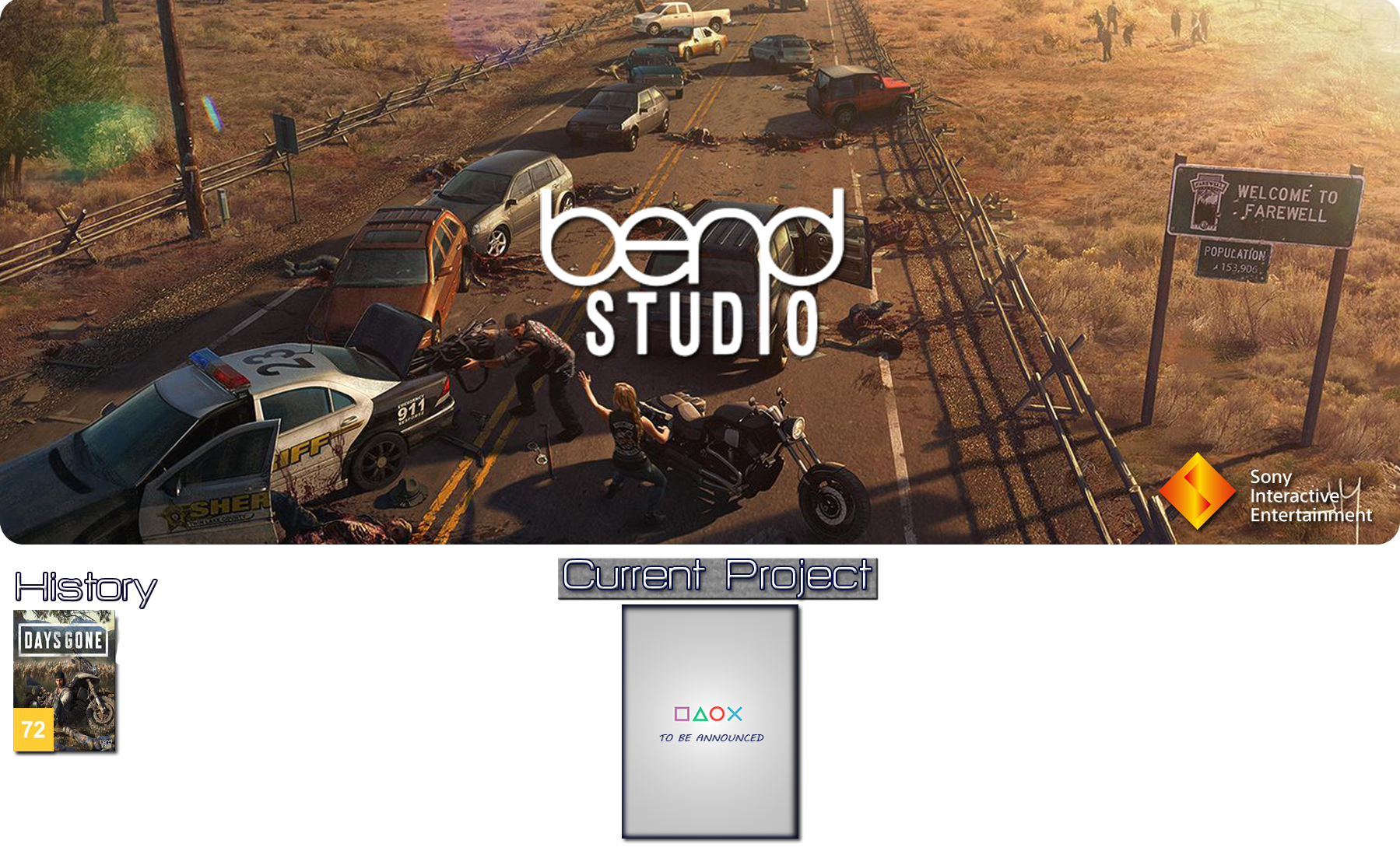 Formely known as Blank, Berlyn and Co. and Eidetic, which was founded in 1993, they were aqcuired by SIE in 2000 and renamed into
Bend Studio became known as the Team behind the Syphon Filter Franchise. During the PlayStation 3 Generation they were mainly working on handheld games for the PSP and PSVITA. With their new IP Days Gone, they are finally making their big comeback into the Home Console business 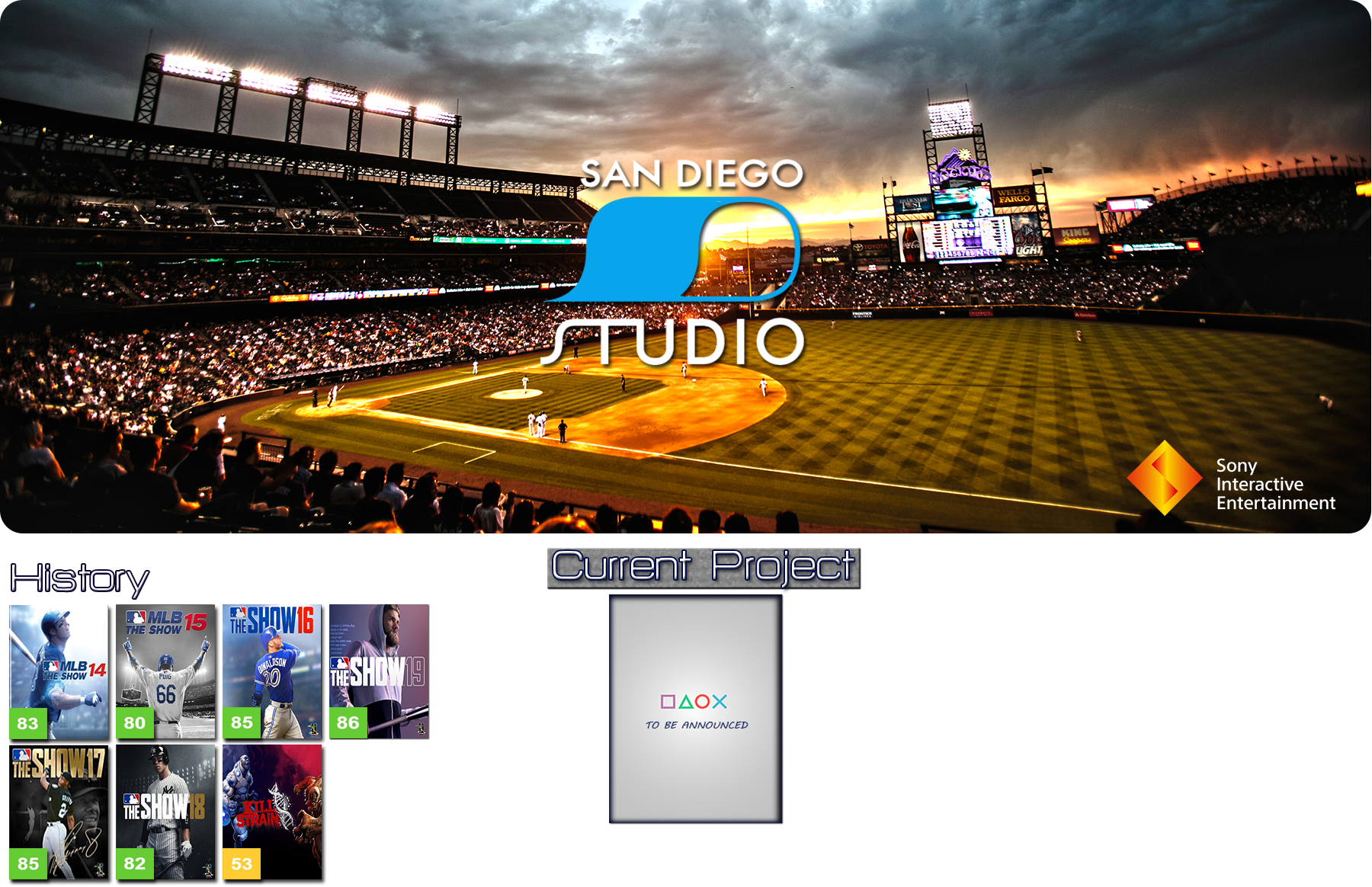 SIE San Diego was established in 2001. The Studio has a long history with sportsgames from NBA to Karting titles. Currently they are delivering the yearly MLB Games. 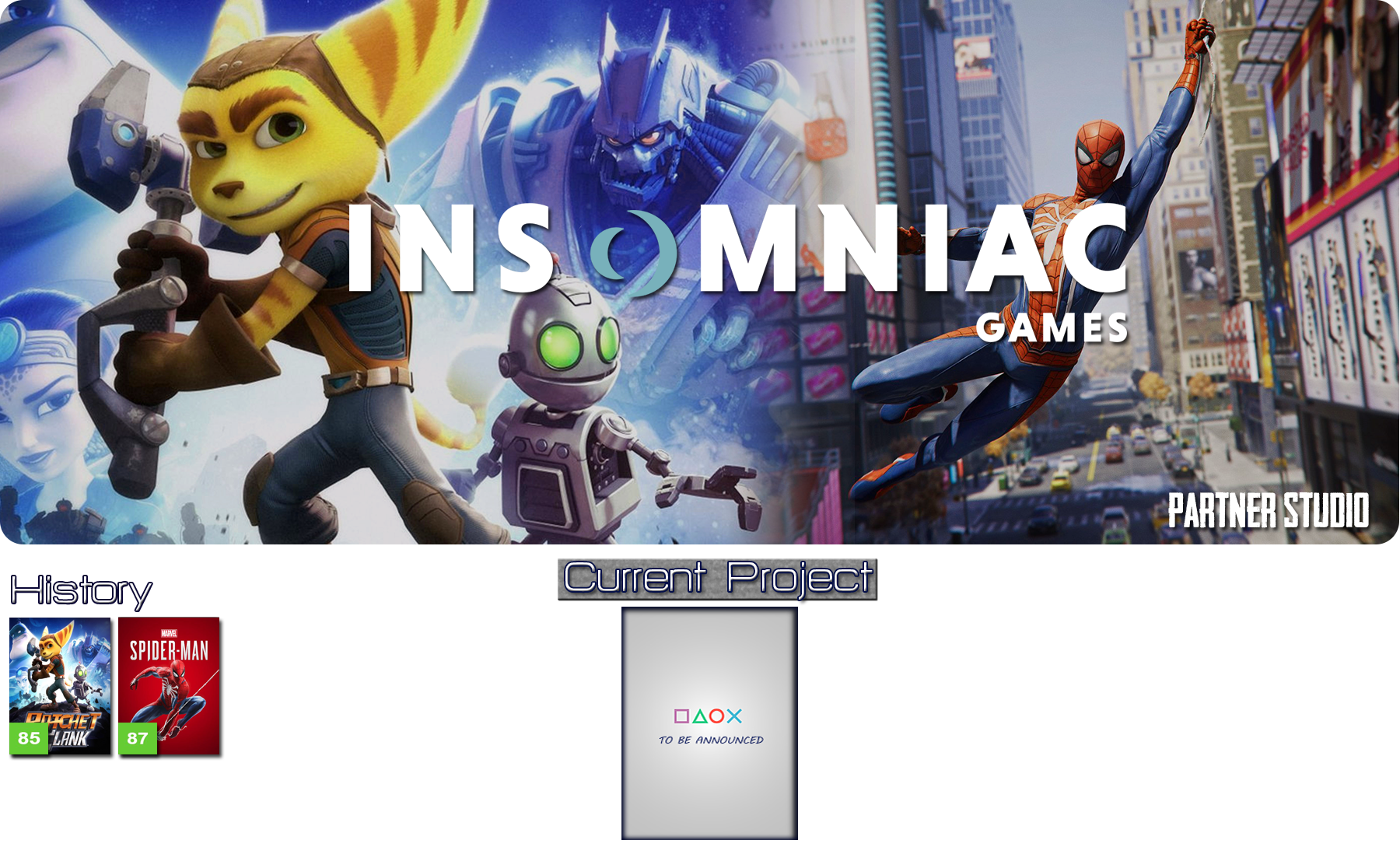 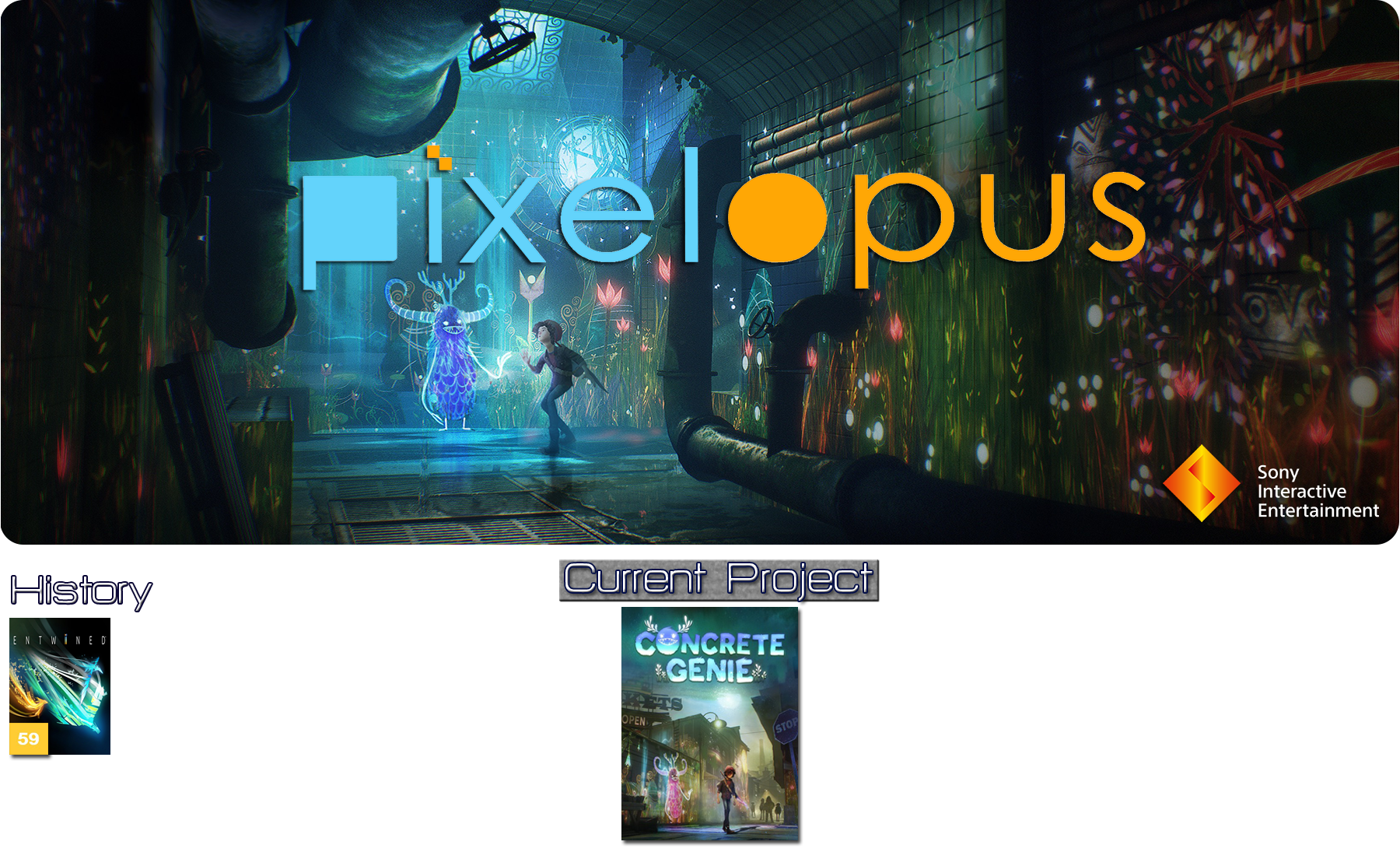 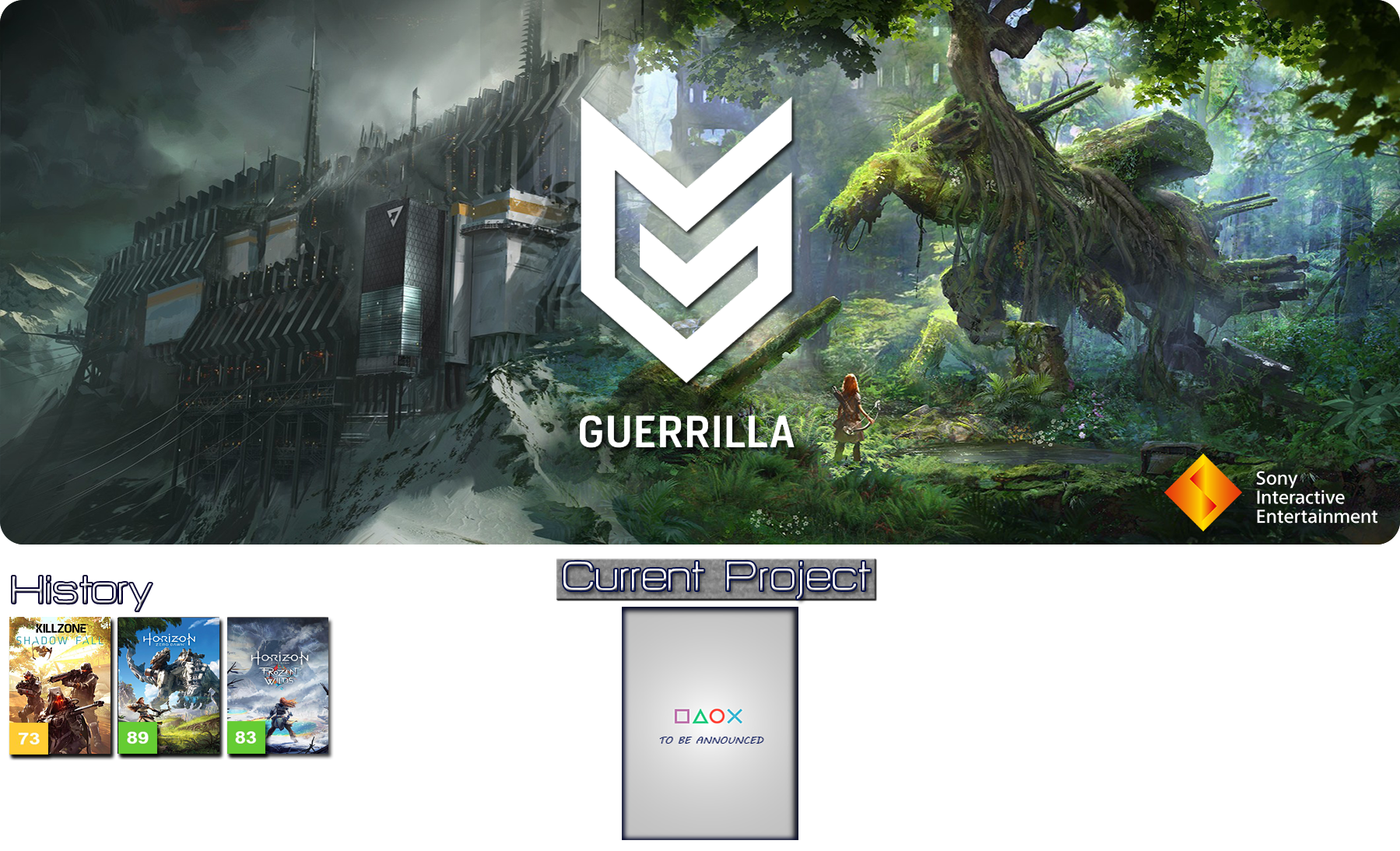 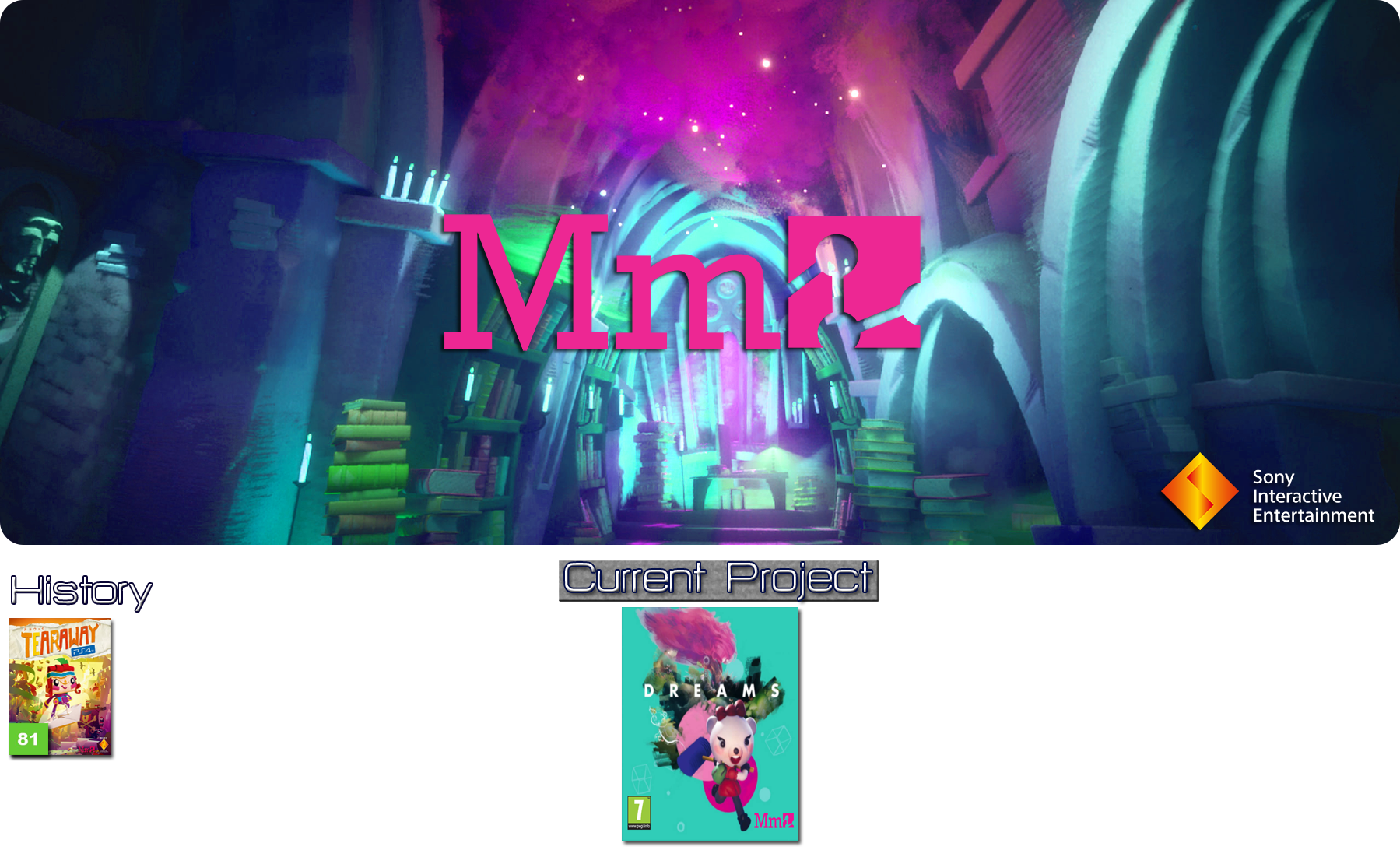 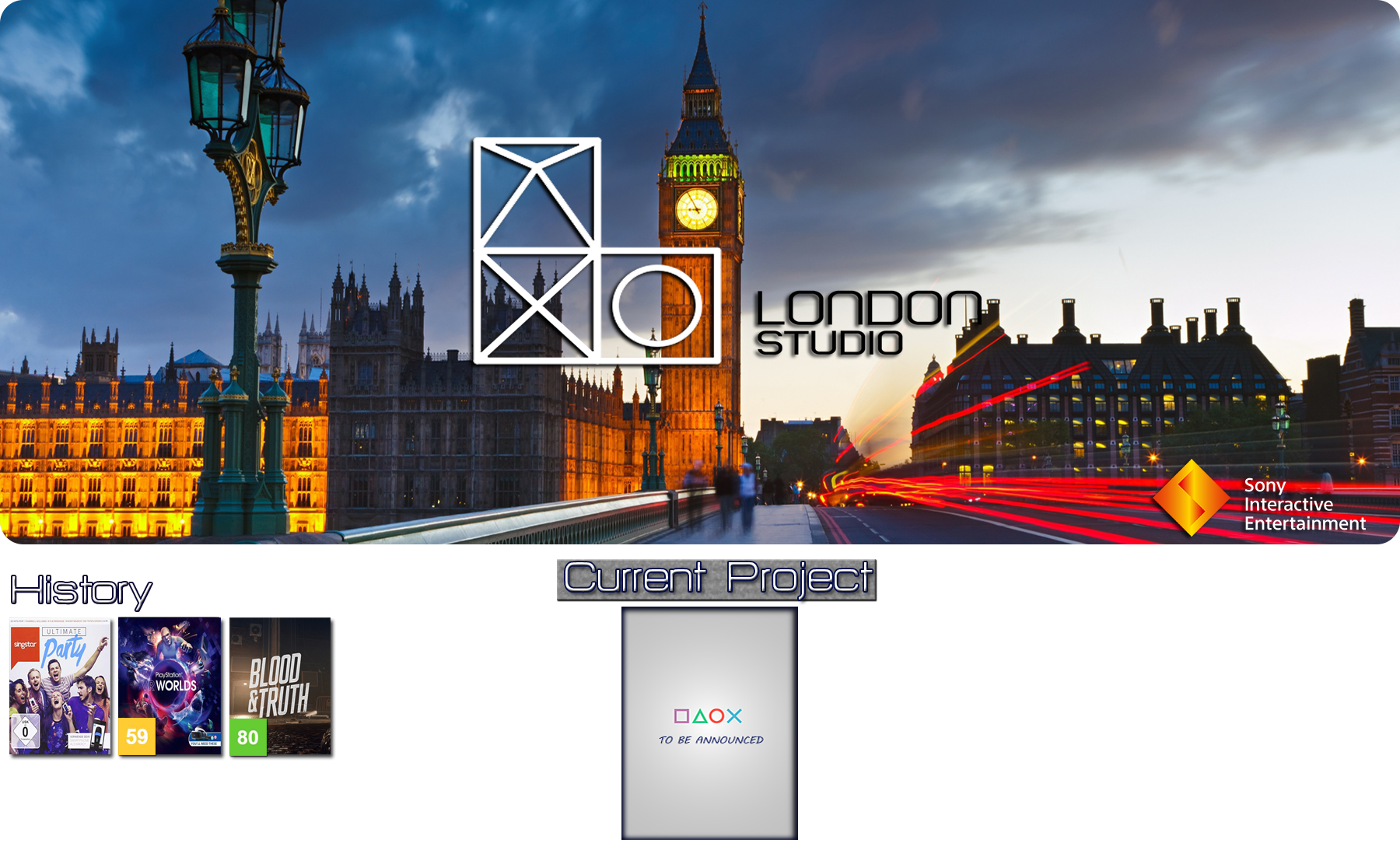 SIE London Studio is one of the oldest First Party Studios, established in 1993.
The Studio was formed in 2002 by the merger of Studio Camden and Team Soho.
They are currently responsible for VR Games
SIE London Studio developed a virtual reality (VR) rendering technology, called the LSSDK engine, which supports PlayStation 4 and PC
------------------------------
Studio Size: 92
Location: London
Key People: 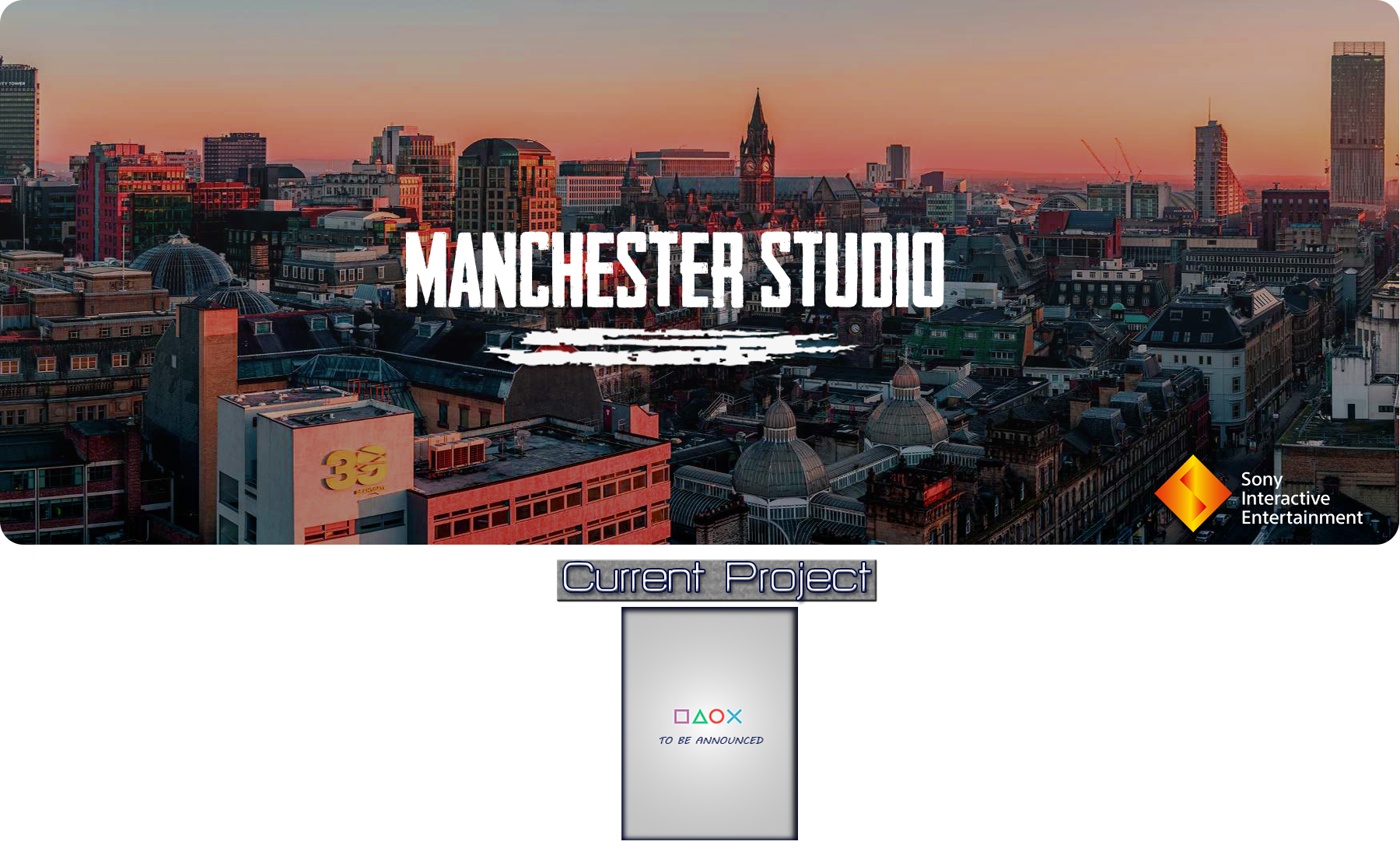 Not officially revealed yet, Manchester Studio, formerly known as North West Studio, is one of Sony's newest developers.
Based on the job descriptions regarding the Studio, they are working on a high profile VR Game.
------------------------------
Studio Size:
Location: Manchester
Key People: 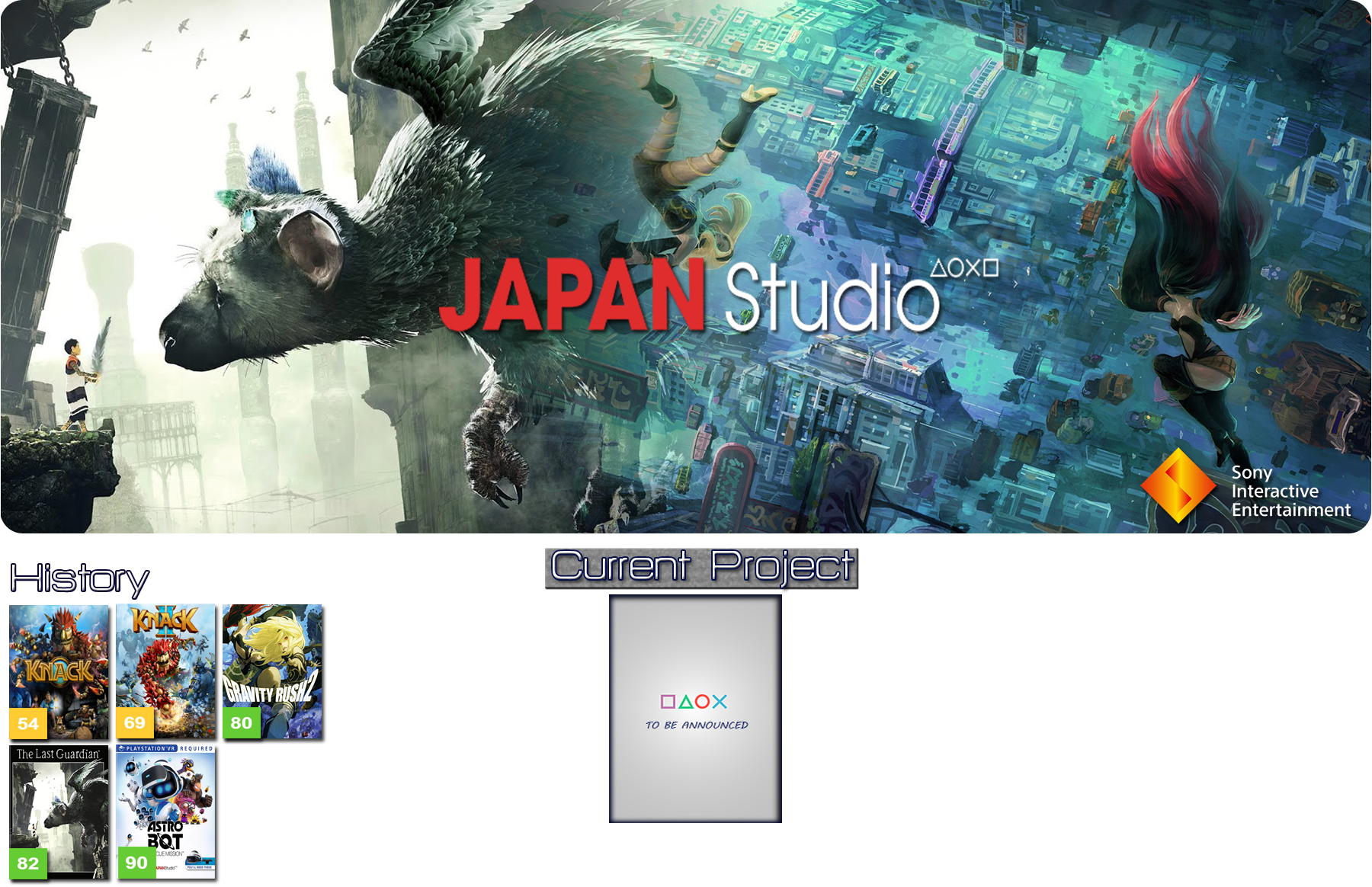 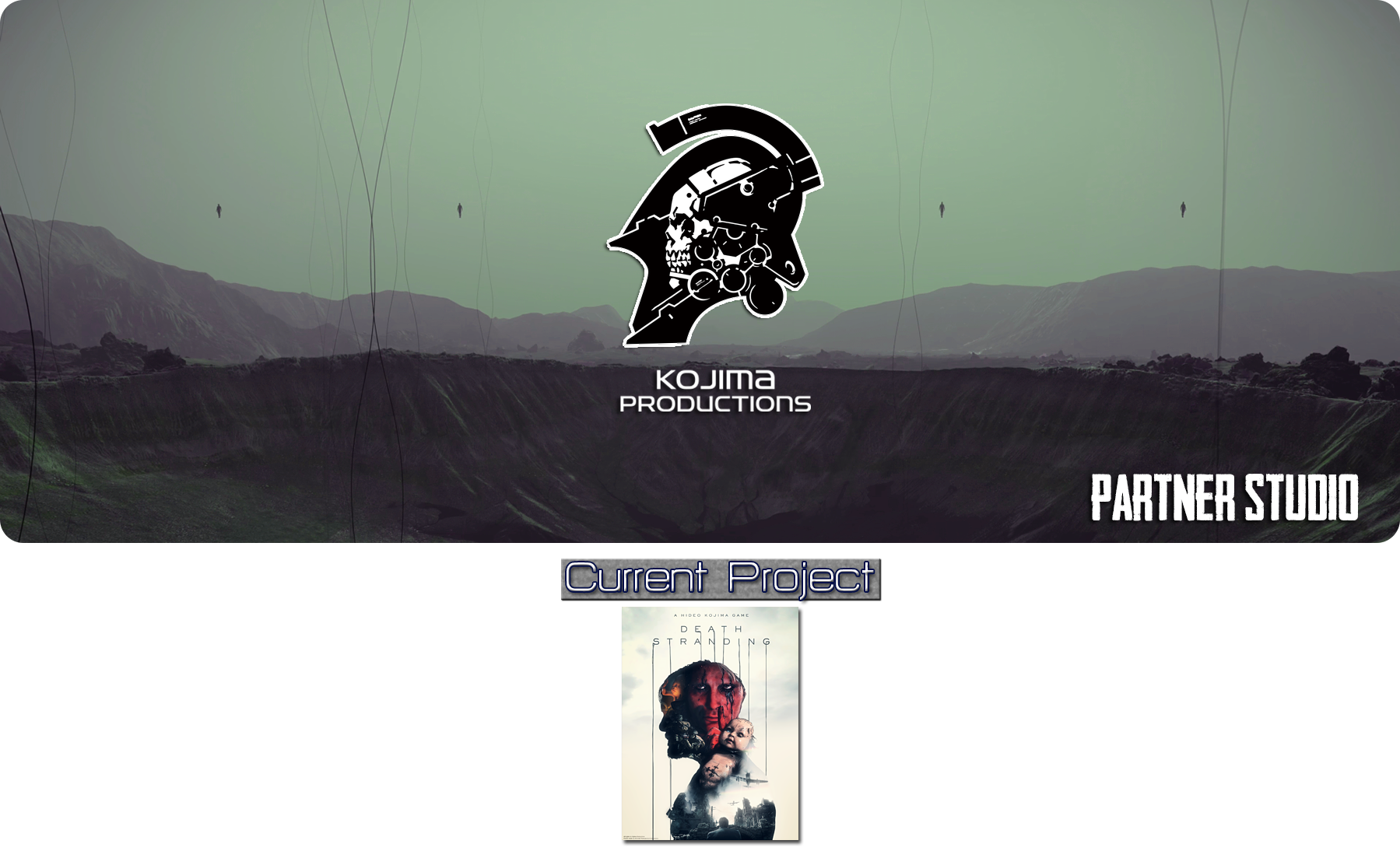 XDev Studio Limited collaborates with independent development studios across Europe and other PAL territories to publish content to PlayStation platforms all over the world. XDev has helped to create and publish, titles such as the LittleBigPlanet, Buzz!, MotorStorm and Invizimals series, Super Stardust HD, Heavenly Sword, Heavy Rain, Beyond: Two Souls, Tearaway and Resogun

The Visual Arts Services Group is a division of SCEA’s Product Development Services Group. VASG is a full-production studio located in San Diego that specializes in Animation, Motion Capture, Cinematics, Art and Scanning.
Visual Arts Services Group, a multi-award winning team responsible for the cinematic performances in premier Sony PlayStation franchises like Uncharted, The Last of Us, Killzone, and other iconic series
Click to expand...
Click to shrink...

is a video game developer part of SIE Worldwide Studios which is owned by Sony Interactive Entertainment and established in 1998. As implied by its name, it is now based in San Mateo, California but it was relocated from Foster City, California. It is mostly responsible for overseeing the development of first party games by external developers. It co-developed the SOCOM US Navy SEALS series with Zipper Interactive, and the Sly Cooper series with Sucker Punch Productions.
Click to expand...
Click to shrink...

Insomniac Games:
New Ratchet and Clank might be heading to PS4
Spiderman Sequel already in the works

Others:
Bloodborne 2 Easter Eggs in Deracine
Bluepoint Games next Project will be a Envisioning of a Former Title
Housemarque working on AAA Game
Arrowhead working on a multiplayer AAA Game
Supermassive Games working on several PlayStation Exclusives
Impulse Gear is working on a AAA VR Game
Sly Cooper TV Show launching in October 2019

Will be updated and sorted by Studio!

Grats on the BC! New home!

Great OT. I suspect we'll have plenty to discuss in the coming weeks.

Excellent OP. Wonder if this thread gets lively over the coming weeks lol.

oh i see you went with my suggestion of making it Worldwide studios now, great.
great job on the OT.
now all that is left is waiting on the death stranding trailer tomorrow.

That one lil accolade under media molecule is insulting

anyone got a bottle of champagne to smash over the hull

First time posting in the Sony threads. Felt lost while browsing the last one but all the info up will be very helpful with catching up with all the news. Great OT.

So this is the new home for first party JRPG discussions? Excellent.

(Only sort of sarcastic)

Good job on the OP.

Wooooo! New thread!! This calls for a celebration, TLoU date anyone?

JuanLatino - just one thing mate - you’ve spelled Polyphony ‘Polyphoni’ in your quite paragraph.

Goddd everything is so nice and organize

Great OT. I hope the rumor that Supermassive is working on an exclusive is true. I would love another Until Dawn game, first one was an underrated gem this gen.

timedesk said:
Great OT. I hope the rumor that Supermassive is working on an exclusive is true. I would love another Until Dawn game, first one was an underrated gem this gen.
Click to expand...
Click to shrink...

Didn't Supermassive themselves say they were working on more exclusive stuff for Sony?

Amazing OP!
Though just a heads up that there is a typo in the first sentence :p

Great OT as usual, thanks JuanLatino.

PlanetSmasher said:
Didn't Supermassive themselves say they were working on more exclusive stuff for Sony?
Click to expand...
Click to shrink...

According to the OP yeah. It was just a surprise to me because, last I heard, they were not interested in doing exclusives after their VR games. I totally missed that they were working on more Sony games. I'm super happy they seem to be making more games.

What happened to the subtitle trailer this week? :p

Anyone concerned with Dreams sales / player numbers just check how many people are following mmDreamQueen at https://indreams.me/MmDreamQueen (or you can see this in the game itself) Anyone who plays dreams follows her by default. You can unfollow them but not sure how many people would do that. Currently sitting at 92,826

i can smell the blood soaked stench of a nightmare induced blood drunk hunter coming to a PS5 launch near you.

Ghost of Tsunami is my most anticipated PS4 game!

The hype for the upcoming exclusives is real. Can't wait to see Horizon 2 on PS5.

And I have a feeling we'll be eating good these next few weeks even without an E3.
Threadmarks