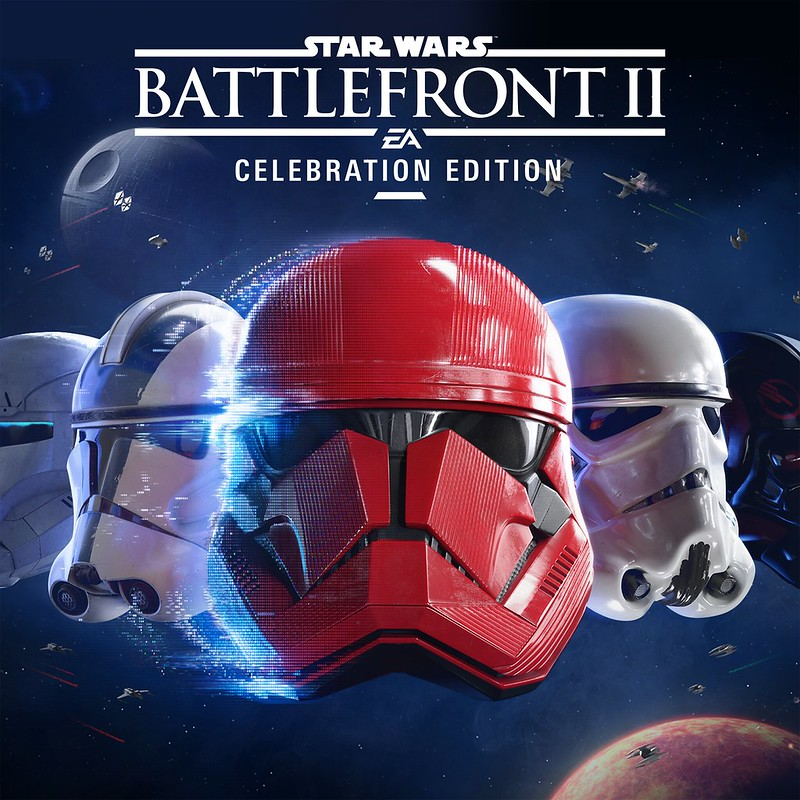 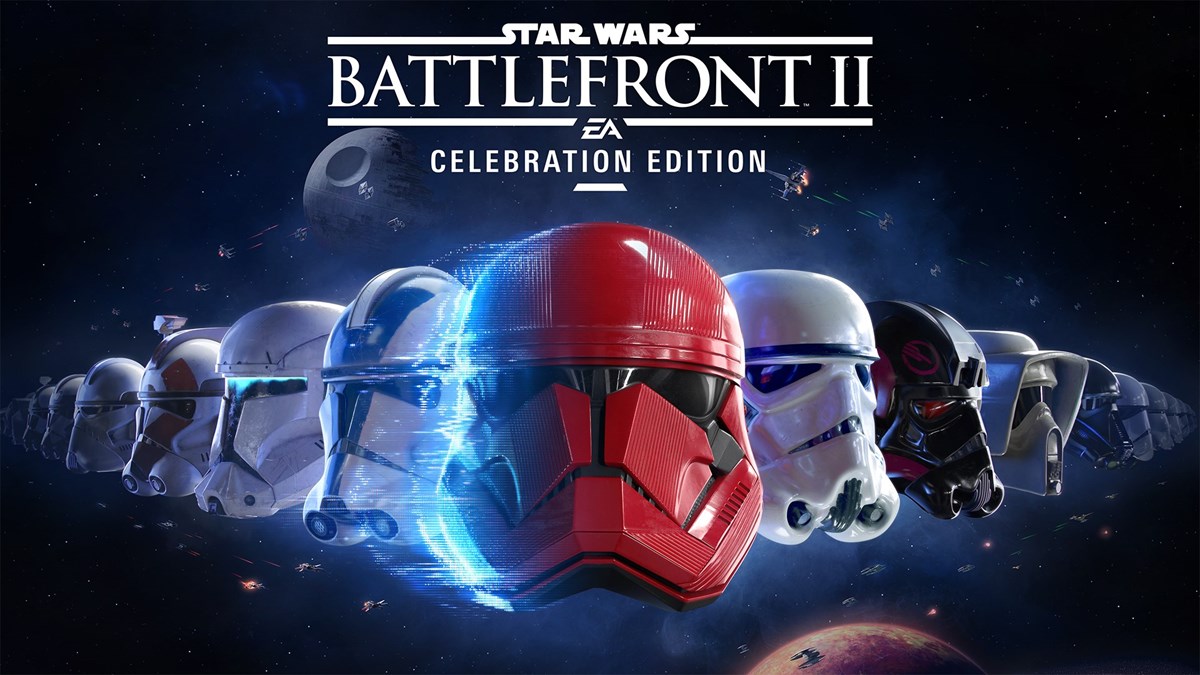 Cheapest price for STAR WARS™ Battlefront™ II: Celebration Edition on Xbox One in all regions, updated daily. Set a target price and we'll notify you when it drops below!

Be the hero in the ultimate STAR WARS™ battle fantasy with STAR WARS™ Battlefront™ II: Celebration Edition! Get STAR WARS Battlefront II and the complete collection of customization content acquirable through in-game purchase from launch up to – and including – items inspired by STAR WARS™: THE RISE OF SKYWALKER™* when they release December 20, 2019. The Celebration Edition contains: ● Base Game ○ Including all past and future free game updates as they release ● More than 25 Hero Appearances ○ Including six Legendary Appearances, plus one Appearance each for Rey, Finn, and Kylo Ren inspired by STAR WARS: THE RISE OF SKYWALKER, coming December 20 ● More than 125 Trooper and Reinforcement Appearances ● More than 100 Hero and Trooper Emotes and Voice Lines ● More than 70 Hero and Trooper Victory Poses. Put your mastery of the blaster, lightsaber, and the Force to the test in Capital Supremacy’s massive, multiplayer tug-of-war. Battle alone against AI foes in Instant Action. Play together with friends through exciting Co-Op missions. Partake in large conflicts on iconic planets and with characters across three STAR WARS eras. Additionally, starting December 20, 2019, experience intense battles on an exotic new battlefront with Reinforcements inspired by STAR WARS: THE RISE OF SKYWALKER. Celebrate two years’ worth of free updates and content since launch alongside the game’s thriving community. Live out the STAR WARS battles of your dreams. Heroes are born on the battlefront. *Customization content released after December 20, 2019 is not included in the Celebration Edition. Conditions & restrictions apply. See ea.com/legal for details.
Click to expand...
Click to shrink...

Official announcement should be Wednesday!

This is awesome! With the addition of the Sith Troopers, this game now completely covers all three of the trilogies!! 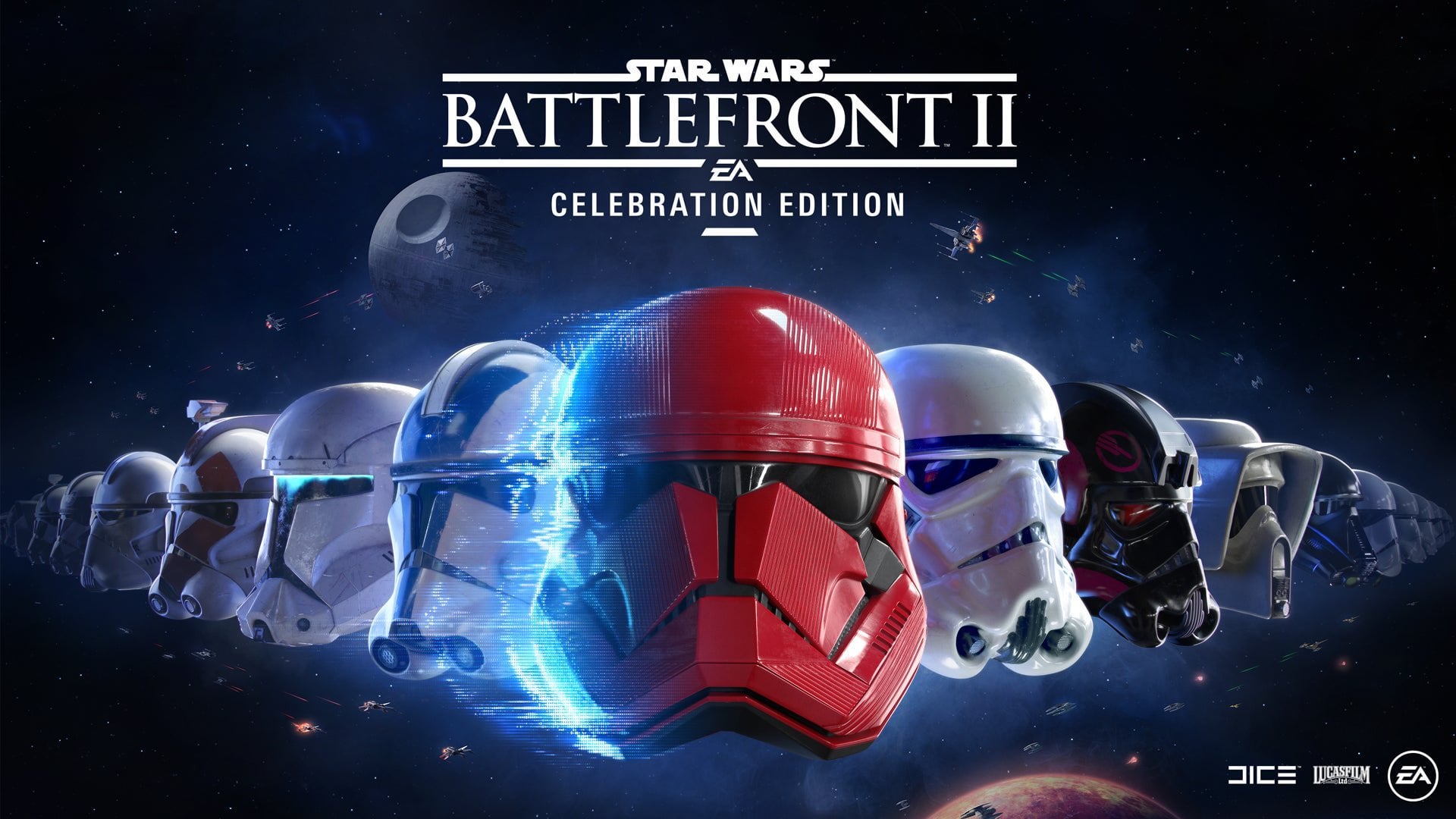 The Rise of Skywalker Update

Star Wars: The Rise of Skywalker

The next update for Star Wars Battlefront II is titled The Rise of Skywalker and as you might have guessed, it focuses on content around the upcoming, highly anticipated film.

So what’s coming in the update? First off we have a brand-new jungle planet. You might have caught a glimpse of this jungle like planet in the last trailer for Star Wars™: The Rise of Skywalker™. We’re bringing this planet to Co-Op in December, where you’ll be playing as either the Resistance or First Order as the conflict spreads to this tropical paradise. It will also be coming to Heroes Vs. Villains.

A new planet is great but we’ve also previously mentioned new reinforcements, and this month we have four brand new ones arriving into the game, split evenly between the Resistance and the First Order.

Joining the ranks of the First Order will be the Sith Trooper, a merciless trooper excelling in speed and advanced weaponry to hunt down and destroy anyone that stands in their way.

Alongside the Sith Trooper will be the First Order Jet Trooper that has received new training and jetpack equipment to achieve dominance over the Resistance . Achieve aerial superiority over the Resistance by using your grenade-attachment enhanced blaster rifle as you dodge, hover and maneuver through the air.

Taking up arms for the Resistance will be the Gunner and Spy unit. These are two new alien species from Star Wars: The Rise of Skywalker.

Since the release of Co-Op, one of the big requests was focused around bringing new eras to the mode. This month we can confirm that the Sequel Trilogy will be arriving into Co-Op across the following maps: Jakku, Takodana, Starkiller Base and our new Star Wars: The Rise of Skywalker inspired planet.

New appearances are also on the way. Rey, Finn and Kylo Ren will all be receiving a brand new appearance based on The Rise of Skywalker. These appearances will be available to everyone who owns the Celebration Edition, and also for credits and crystals.

The release of this update is ever so slightly different when compared to previous ones. It goes live on December 17, with one exception to this rule, the new planet, which joins our planetary rotations from December 20.

Into the New Year

It’s incredible to think we’re already in year 3 of the game’s life. With 2019 fast coming to a close our attention now turns towards what’s next.

In January, we will continue with Sequel Trilogy content as we will bring it to both Instant Action and Capital Supremacy. This includes the Resistance MC85 and First Order Resurgent-class Star Destroyer.

Rounding out January will also be two new heroes: BB-8 and BB-9E

We’re already thinking about February and March, and we’ll be back closer to the time with all the details on what to expect.

From all of us on the Star Wars Battlefront II team: Thank you for being a part of this journey and we look forward to seeing you in-game over the holiday season.
Click to expand...
Click to shrink...

Do the Sith troopers fly.

Could we potentially see a Steam release coincide with this too?
OP
OP

Previous teases indicate that we're getting 1 TROS Planet and 2 reinforcement, so maybe both of the Sith Trooper looks? 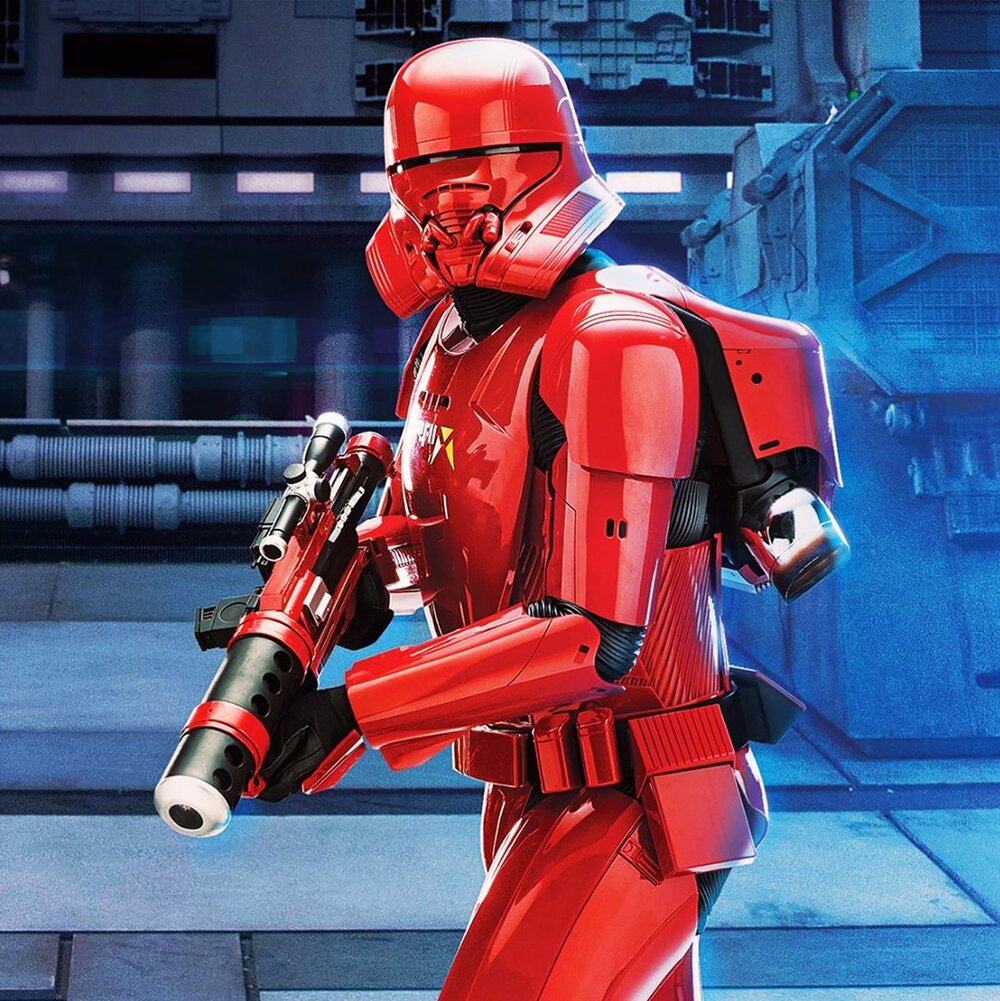 Damn that's a lot of cool unlocks it comes with. Release date is this week apparently.

Hopefully there's some kind of upgrade for current owners.

I’m praying that map is for Galactic Assault

So will this most likely be the last big free dlc drop? I know it says content afterwards but can't imagine it being huge content.

Gen 2 Clone Trooper helm is still the best. Don't @ me.

Only one new appearance for Rey, Kylo and Finn though is a bit of a shame. Was kind of hoping we would see more variations, like hood up or down for Rey/Kylo and helmet on or off for Kylo. Maybe they'll add them in eventually though, fingers crossed.

Really wish I enjoyed this game more, so much content has been added the past year or so

Honestly, if this comes out on Steam and does unlock everything all the customization stuff I might just get it. I really wanted to get the PC version but it didn't want to grind everything back unless they bring in cross saves.

Every helmet of clones/ stormtroopers and now sith troopers but not B1 battle droid on the cover?!? smh
OP
OP

You're not wrong. And that's why the Sith Troopers take inspiration from it

Every Battlefront II that has ever existed has been fuckin incredible. 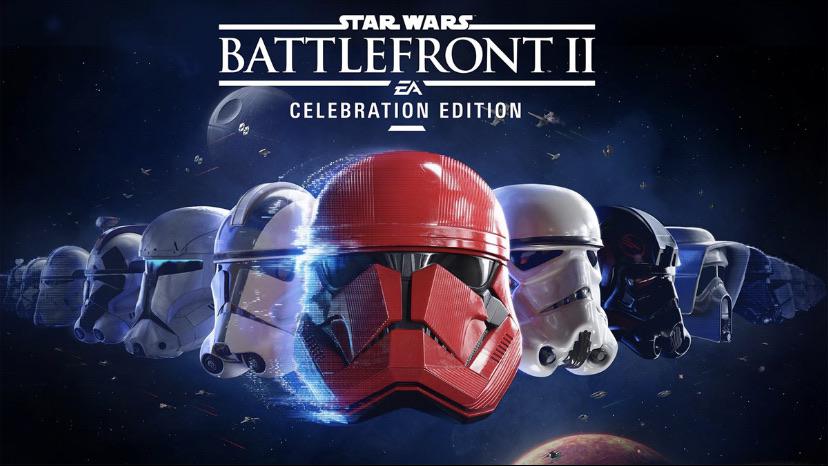 Nice, this game needs a bit of popularity boost.

Wonder if this will get a Steam release.

I have Origin Access Premier either way. I should maybe give this a go once this new edition is out. Kind of avoided the game outside of some of the boring single player but I hear it's better now.

I just need that main menu update now- I want to ideally select which map I'm joining, or at the very least which era for conquest or Galactic assault.

This game deserves a second chance- it's really good! Hope this breathes new life and we get an increased rate of content.

The OT should be renamed to something like this.

I enjoyed the first one but wanted to wait for the second to get past its growing pains phase, so maybe this is the opportunity to finally get it.
OP
OP

Might as well squeeze a few more sales out of Episode IX, smart.

Oh shit, did we know about Sith troopers before? I’m hyped.

Well heck, I just bought this on PC. I wonder if the new content/unlocks will be free for existing owners or if it will be an upgrade cost.

Yep. I'm gonna need that without the text plz.

Nah it’s all about that Gen 1 Clone armor. Gen 2 is great though.

I hope this comes to steam. it will do well there also.

Missed opportunity to call it the Pride and Accomplishment Edition.

I'm playing the game right now with my brother. So much fun! No new heroes though?
OP
OP

Couscous said:
I'm playing the game right now with my brother. So much fun! No new heroes though?
Click to expand...
Click to shrink...

I wonder how much will this cost, a coworker wants to get this game.

Waited two years for this. Can't wait to dive into everything.

SpotAnime said:
Well heck, I just bought this on PC. I wonder if the new content/unlocks will be free for existing owners or if it will be an upgrade cost.
Click to expand...
Click to shrink...

Probably a dumb question but can you play this offline? I got a Star Wars itch but I don't have PS+.
OP
OP

VorpalNonsense said:
I too am wondering if there will be an upgrade path for existing owners offered
Click to expand...
Click to shrink...

All this edition does is unlock all the skins and emotes. The base game will receive all this troopers, planets, etc for free.

The skins and emotes will be available for unlock through gameplay (grind) or with MTX.


Gold Arsene said:
Probably a dumb question but can you play this offline? I got a Star Wars itch but I don't have PS+.
Click to expand...
Click to shrink...

There is an 8 hour campaign with a kinda meh story and several offline modes, though they're not as fun or feature complete as online.

They recently added "Instant Action" which lets you play a conquest singlepayer game with bots, but its only 5 maps, and only for the Clone Wars Era

Gold Arsene said:
Probably a dumb question but can you play this offline? I got a Star Wars itch but I don't have PS+.
Click to expand...
Click to shrink...

The campaign is 7 hours of mediocre action missions/set pieces, but they recently added Instant Action which let's you play some modes offline on Clone Wars era maps.

Couscous said:
The campaign is 7 hours of mediocre action missions/set pieces, but they recently added Instant Action which let's you play some modes offline on Clone Wars era maps.
Click to expand...
Click to shrink...

See that's what I was wondering if you could use bots to play the game offline.

If you can't access everything that's a downer for me. Guess I'll pass for now.

I hope they add some Starfighter Assault maps. And Extraction. And trophies.

Gold Arsene said:
See that's what I was wondering if you could use bots to play the game offline.

I think there's also an offline mode in which you can play several objectives on maps of all eras. I played it a couple of weeks ago. You can be any hero in it.
You must log in or register to reply here.
Share:
Facebook Twitter Reddit Pinterest Tumblr WhatsApp Email Link