Manga is just plain goofy now, but I guess I'm just going with the flow here for it and all. Could have handled things differently for much of this arc.

Anyway, I do like the family twist being present.

Will anticipate that like always the main cast will be spared and "younger brother" will actually be the one killed.

Ray and Emma and Norman continue to have every avoid all damage cheat active.

Should've picked up on the family connection. The masks are really similar.

I need to know what the God dude's deal is

I'll admit, I'm a little bored with all this demon fighting

I like that the body horror still shows up.

Ultimately I think they need to pick up the pace here I think. The final conflict is clearly the New Promise (and what Emma has to lose). I don't believe any other consequences are feasible, so I don't find the Queen all that threatening.

I was hoping we were gonna get more of that "twisted people from the past" conceit as they appeared as faces on the abomination. But that went away real quick. Now it's just a rather plain final boss that had no build up or real attachment to anything that came up to this point. At least give it Isabella's face or something with the excuse that the kids still fear her, deep down inside.

Do like sonju and mujinka making the final stand, but yeah hope this won't be dragged out.

Ready for this manga to end.

Also I can't help but feel this setup was videogame final boss fight, aha I have a 2nd form, inspired.
OP
OP

OP characters catching their opponent's attack/weapon and being like "you can have this back" is one of my favorite battle manga things. 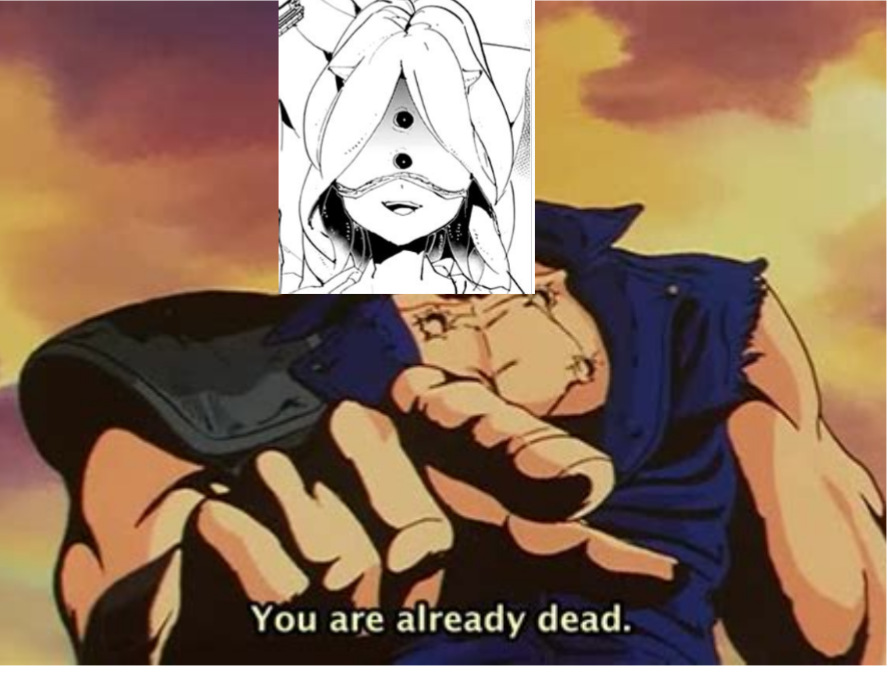 That was pointless. We saw her "die," then we witnessed all that transformation stuff and trash talking only for her to die anticlimactically again. We got Sung-Joo and Musica backstory I guess so that's sorta something. And I guess Zazie may be dying... But, all that extra material with the queen ultimately feels like a giant waste of time. Did it really deliver anything satisfying to justify stretching this underwhelming final battle for several more chapters? I don't think so.

Feels like the end is nigh. Cant imagine dragging this out longer unless the promise is some battle royale.

Hopefully all the fighting are done now.

I wonder what is the new promise... I wouldn’t be surprised if Emma is going to be the next [unpronounced].

Man, this manga is still enjoyable but I’m kinda disappointed with the route it went. The magic of the first arc was never recaptured after all.

Spoder said:
Hopefully all the fighting are done now.

I wonder what is the new promise... I wouldn’t be surprised if Emma is going to be the next [unpronounced].
Click to expand...
Click to shrink...

No idea. You have to give up what you love most. The series since then has just been victory after victory, but I feel like that's just setting up a bigger gut punch for the ending.

Unless she talk no jutsu's God, then she's been somewhat doomed since she remade that promise.

I also like the first arc the most. This manga felt so special when it relies in smart and intense cat and mouse games, especially during the traitor scene. I wonder if there’s another manga that feels like that?

On the recent chapter, I kinda find Sonju adorable lol. He and Musica are really great friends together.

The vast majority of Promised Neverland fans probably enjoyed the first arc the most.

FluxWaveZ said:
The vast majority of Promised Neverland fans probably enjoyed the first arc the most.
Click to expand...
Click to shrink...

Guess we're going back to my prediction of the super happy ending, like no losses or anything on their side, incredible.

Norman being welcome with hugs and all after doing all that he did is going to forever be the most amazing thing ever, no punishment.

Always knew Ray got the yams. It's why he's my favorite.

(Didn't appreciate him saying "we killed all those demons" as though he straight up shares in Norman's sins, as if casually forgiving them wasn't enough)
OP
OP

Possibly a weird/dumb question but have the "demons" ever actually referred to themselves as such as a race? I ask because their name was kinda mysterious at the start of the series with the children calling them demons, Krone I think just referred to the race as "them" and maybe there were some "monsters" thrown around too but this chapter had Emma saying "the demons" while talking to Mujika about her race and I thought that odd (I was like "wait is this racist" lol, though Mujika didn't seem to care). Did demon just casually become the name of their race just like how their names go from being unintelligible to perfectly normal once they become relevant in the story or do they still not have a name for their race?

This is probably the first time I've felt like this manga is dragging. It doesn't help that the new promise was already made so everything else just feels like wasting time. But the fighting in general has taken way too long and I'm checked out at this point.

Well I find the human v human situations in this serious more compelling than the demon v demon so Im stoked for the kids v Peter Ratri. Wonder if this is where we're going to get causalities on the protagonists side again, just like with Yugo.

i wonder if Isabella is still alive

I expected Grace Field to be the setting of the final battle. I hope it won't be just a simple battle, but that we will still get some plot twists (for example, about Minerva), apart from Emma's new promise.

Dont even know what opinion I have of this anymore.

I guess the manga couldn't have ended on the last fight, but I wonder if emma promise could have taken care of/ involved the ratri clan instead of this fight.

Dedication Through Light said:
Dont even know what opinion I have of this anymore.
Click to expand...
Click to shrink...

At this point, I'm just reading this and taking in the new information, not disliking it, not particularly liking it either.
No discussion of chapters before the official English release
OP
OP

Yesterday, two well-known providers of unofficial Shonen Jump chapters ceased their activities. I believe at least one of them was working on The Promised Neverland and as a result their chapters were sometimes discussed here, ahead of the official release.

Now that those providers won't be working on this series anymore, if you want to read The Promised Neverland, you can use one of the following services:

The OP has been updated with the relevant information and new rules.

Holy crap! The revelation at the end lf this chapter was unexpected.

well...things are getting interesting again Silfer

It will be interesting to know why and how Isabella became Grandma. After most of the children escaped from Grace Field, she wished them the best, admitting she lost. How is it possible that she became the Grandma, instead?
Last edited: Dec 22, 2019

Dany1899 said:
It will be itneresting to know why and how Isabella became Grandma. After most of the children escaped from Grace Field, she wished them the best, admitting she lost. How is it possible that she became the Grandma, instead?
Click to expand...
Click to shrink...

What he said. I thought Isabella would be killed/eaten as punishment, not fail upwards (it's like the One Piece World Government). Is she somehow an enemy again, after wishing them the best, or is she still "good"? Maybe she's been plotting some kind of revenge against the system now that she has this power?

I don't know how/where this is going but, I'm certainly interested!

I've been a bit meh on the series for a minute, but Isabella getting reintroduced as Grandma has peaked my interest.

A.J. said:
I've been a bit meh on the series for a minute, but Isabella getting reintroduced as Grandma has peaked my interest.
Click to expand...
Click to shrink...

My boy Phil needs to reappear soon too.

I'm amazed Isabella wasn't killed for her failure, and that she got promoted.
Makes me wonder what happened to the original Grandmother. Next chapter will likely explain all this.

Maybe they brainwashed her. Who knows.
OP
OP

DanarchyReigns said:
I'm amazed Isabella wasn't killed for her failure, and that she got promoted.
Click to expand...
Click to shrink...

Lol I wanted to ask in my post if brainwashing was known to be a thing in the series.
Last edited: Dec 22, 2019

Alright. Going to be a long 15 days

oh yeah, i was going to post this as well

The GOAT is back, now it's come full circle! Can't wait for what's coming.


A.J. said:
I've been a bit meh on the series for a minute, but Isabella getting reintroduced as Grandma has peaked my interest.
Click to expand...
Click to shrink... 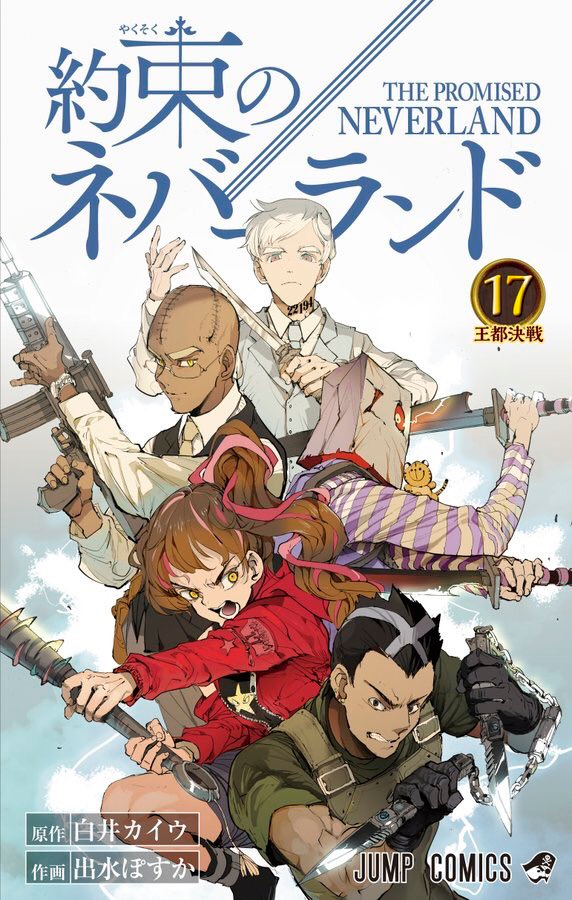