Kobe was traveling with at least 3 other people in his private helicopter when it went down. A fire broke out. Emergency personnel responded, but nobody on board survived. 5 people are confirmed dead. We're told Vanessa Bryant was not among those on board.

The cause of the crash is under investigation.

Kobe has famously used a helicopter to travel for years -- dating back to when he played for the Lakers. He was known for commuting from Newport Beach, CA to the STAPLES Center in DTLA in his Sikorsky S-76 chopper.

KB is survived by his wife Vanessa, and their four daughters -- Gianna, Natalia and Bianca and their newborn Capri.

Kobe has recently been spotted out at NBA games with his daughter Gianna -- a rising star basketball player herself. Their youngest daughter, Capri, was just born in June 2019.
Click to expand...
Click to shrink...

Uhhh what the fuck

The Flagpole is Wider

yea I just read that. wow.

Is this for real?

Are you fucking serious

What??? No way! Holy shit absolutely horrendous if true.

I really really hope not, but TMZ doesn’t miss...

Was expecting this to be bullshit, but goddamn it's TMZ.

I'm going to refuse to believe this. Can't be true.

No fucking way. Please no

This is so fucked.

What the fuck? No way

WHAT THE FUCK.
RIP.

I don't see it on any other news outlets yet, but holy shit.

RIP is this unbelievable.

RIP Kobe... and his friends.

This headline can't be real... 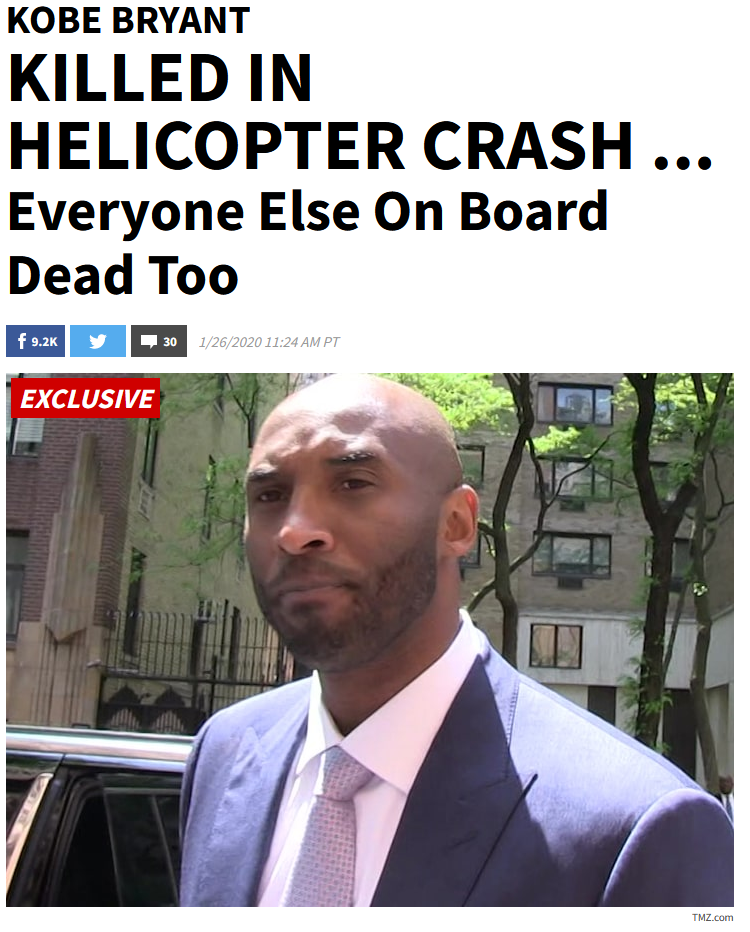