ToiletEra, recommend me a good bidet

I have deciced I don't wanna be a caveman anymore, wanna be accepted into civilization. Can you guys recommend me a good bidet? preferably easy to install.

What country you in?

Do you have a power outlet by your toilet?
OP
OP

Rizific said:
Do you have a power outlet by your toilet?
Click to expand...
Click to shrink...

I got one of the basic knob ones for $30 on amazon but they seem to be all out of stock. I wouldn't mess around with the hose version if you're new.

No power outlet = no heated water/seat and no drying feature. But those are pretty pricey anyway. So just go look on Amazon for whatever has the best/most reviews. Install is very simple for the most part, I'm no plumbologist but managed just fine. Had to go to a hardware store for an extra rubber washer though.

I suggest you to install water hose next to the toilet, its your best cheapest option 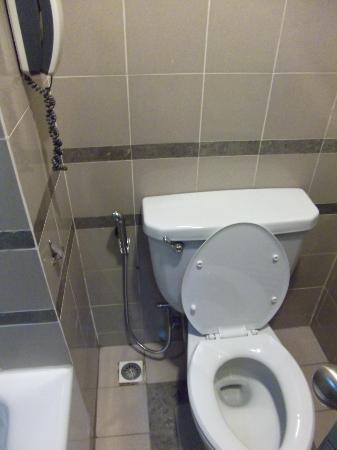 If you're just starting out I'd probably go simple, and seat-mounted rather than handheld. I have a handheld one but it's awkward to use. Maybe you get used to it, but I'd rather have my ass washed than get in there myself.

I will add that I kept the old shutoff valve from a diaper sprayer, as it has a metal ball valve and seemed way more trustworthy than the little plastic shutoff included in the bidet itself. But you can buy those at a hardware store for relatively cheap.

If you want something nice, get a Toto Washlet. They're expensive, but worth it imo.

Jaguar King said:
I suggest you to install water hose next to the toilet, its your best cheapest option

I have a setup like this and it works great. It isn't heated but the water isn't that cold either so it isn't an issue. Was like $30 from Amazon and very easy to install with no leaks.

But they jacked the price up, it was like 35 two weeks ago when I bought mine. So far it's great. None of the fancy features but works really well and not that hard to install. (my toilet being in a very narrow space didn't help, but that would be true of anything)

I just use my hose down by the porch, not too pleasant during winters though

mods, may as well preemptively sticky this thread now

Anyone have any tutorial vids

I would recommend one of the Luxe bidets, it was cheap and works quite well.

Rizific said:
Do you have a power outlet by your toilet?
Click to expand...
Click to shrink...

I would recommend a Brondell Swash, I have had the S1000 model (discontinued though) for more than 3 years and it is such a quality of life improvement. This model does require a power outlet. Heated water and seats, sterilizer, dryer (not very effective), I would buy it again in heartbeat.

If I had a nearby power outlet, definitely Toto. In the meantime, bought a Luxe which has worked for me. Bidet prices are definitely jacked up at the moment however. Major brands are double what they were a month ago.